A Cute Kid, Nostalgia, and a New Neighbor

I would chalk this up as a very good day at Afton Station.  Among a large number of visitors, three are standouts.

The first delightful guest was Keaton Running-Rooster, an incredibly inquisitive and intelligent 6-year-old who visited with his mother Sue Ellen from Indiana.   Keaton examined everything at the Station in quite some detail, then declared "I don't respect the old cars".   He had quite a bit of "respect" for nearly everything else however, particularly the penny-squashing machine and Tripper, with whom he bonded.   Here's they are, together... 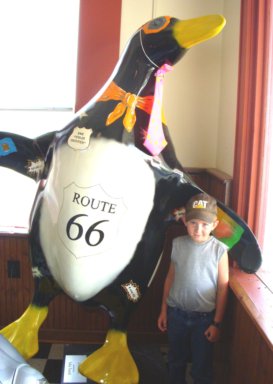 A Rooster and A Penguin... a flock of birds?

Later in the day, I had quite a thrill.   When  tall, handsome bearded guy came in accompanied by his pooch, Sasha, I asked, as always, from whence he hailed.

ME: What part of Ohio?

ME: Ever heard of Dorsh Rd.?

HE: Yes, I used to live there!

ME:  Are you serious?

He WAS!  He lived a few doors down from where I grew up!!!  I can't even express how excited I was.  (You can inquire of Ron McCoy about my excitement , as he was witness to all of this.)   Anyway, Handsome Guy in Red Shirt lived there quite a lot of yearsafter I left, but some of the same families were still there, and I got a few updates, some good and some bad.  I amazed myself by how many names from 50 years ago that I was able to dredge up from my mind, since the last time I laid eyes on any of those folks was when I moved away at age 12).   Small world!   VERY small world!   Miniscule world!  Eventually Handsome Guy in Red Shirt had to move on down the road, but he seemed no more eager to end our reminiscences than I was.

More visitors came and went, and then toward the end of the day I found out that I'm about to have new neighbors!   A very nice family stopped in after negotiating with the owner of the building next to mine which, in the years I've owned Afton Station,  has been a flea market and a storage building and, most recently, vacant and crying out for an occupant.  It's going to be a family owned and run business -- the hand-manufacturing of boat covers and punching bags.  Ron and I were both quite taken by the whole family, and I'm really looking forward to having them next door.  I'm also glad that Afton will have another vital business, because those are few and far between in this town these days.

One last thing... on our way to Afton this morning, we took a short detour on the 9-foot alignment I mentioned the other day so that I could take a picture.  Actually, Ron took it, lying in the road in front of my car.  He's very trusting. 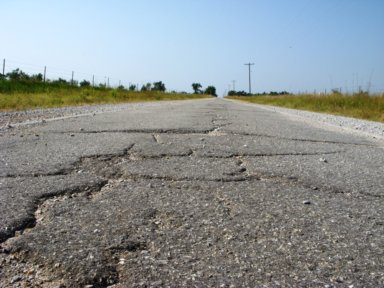 And sounds like you had another great day at Afton.  You have no idea how happy I am for you!  To be such an ambassador for something that is so near and dear to your heart is a wonderful thing.

Yes, a great shot!  It was taken on a lovely morning, too.
I agree that I'm a lucky person to be doing just what I want to do.  Now hurry up and get out here so you can see everything for yourself!