I love really busy days like this.   People started coming in as soon as Ron and I arrived at about 9:45.  The entry to the car museum side was blocked, apparently by a car returned from a car show last night, so the first thing we did was to move the Model T pickup outside to alleviate the blockage.  We think maybe having that gorgeous hot rod outside was instrumental in bringing people in.  We had over 30 guests, including my very first visitor from Algeria (although he lives in the U.S. now), folks from West Virginia, a few from Missouri, a Californian, and a fellow from Albany, NY.  Most of the rest were in-state Oklahomans.   One couple was there to do some preliminary scouting for places to stop on a Labor Day weekend motorcycle tour by their Missouri motorcycle club.  After they looked around, they definitely decided to put Afton Station on the itinerary, so I can expect up to 50 bikers dropping in on the morning of Fri. Aug. 29th.  I won't be there to greet them (dammit!) but I'll make sure someone will.   We also had a visit from a couple I've met before.  Their restored teardrop trailer named "Lucille" was featured at our 2004 Route 66 Festival in Tulsa.   It's all done up in '50s motif and is completely charming. 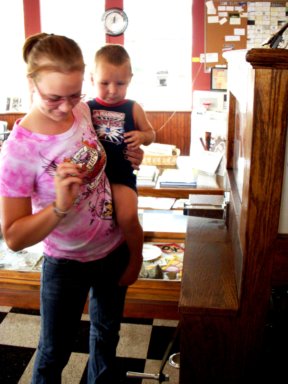 A local mom and child check out the penny squashing machine.

I made a last-minute, hand-scribbled "FREE" sign to put atop our regular "OPEN" sign, just to see if it would draw more visitors.   Maybe that, along with the Model T, was the reason for our increased volume. 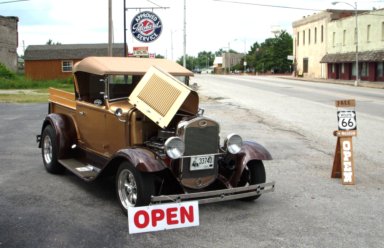 Remember the Avon Courts, which I've talked about in a earlier blog posts?   Here's a photo of the "ghost sign" that appears only when one of the buildings gets damp from rain. 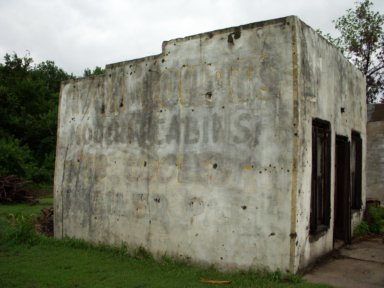