What a strange day it was at Afton Station on this beautiful sunny Saturday.   Ron M. and I had nearly lost hope of anyone coming to visit us when, at around noon, our first visitor appeared.  It was Billy Mack Harrison, the Mayor of Afton!   He's not come around much (only once before) but he stopped in today to give me a face-to-face answer to a question I emailed to him a few days ago.  Nice of  him to take the time!  Shortly after he left, he returned to bring me a couple of Buffalo Ranch souvenirs he found among his personal belongings which I have already put in my Buffalo Ranch showcase collection -- a souvenir plate and spoon.  Thank you,  Mayor Harrison! 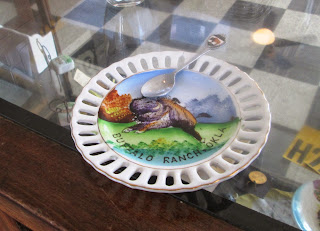 Then there was more waiting for visitors.   I decided to fill some of the time by stenciling the numbers on our new mailbox.  Yes, we can now have mail actually delivered right to the Station.  (I'll still want things sent to my home address, however, until we are sure that the mail carrier has us figured out.) 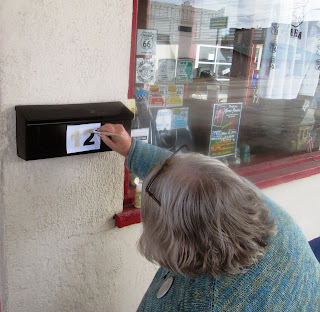 All hell broke loose around 1:30 when every visitor we had all day arrived at exactly the same time.   There was this couple from Enid, OK celebrating their 30th Anniversary on Route 66. 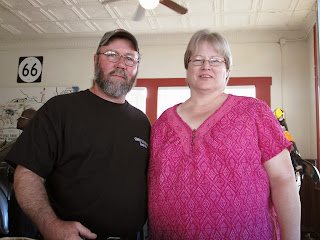 Then there was a fellow who stops in often and always buys a great deal of merchandise and pays in either $2 bills or dollar coins.  Today, he bought two magnets and ten rolls of our souvenir Afton Station toilet paper ( ! ) and gave me 11 of the dollar coins.   He's a unique sort of guy, as illustrated by the silver high heeled shoe that hangs from his trailer hitch.  When asked what he planned to do with the toilet paper, his answer was "I dunno." 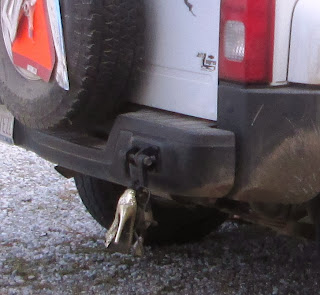 The gentle rumble of motorcycles signaled a visit from a Gold Wing group out of Tulsa, OK, nine people on 6 bikes, an unexpected pleasure.   We've had Gold Wing groups before, but this was the first from this chapter, GWRRA Chapter I.    Here they are. 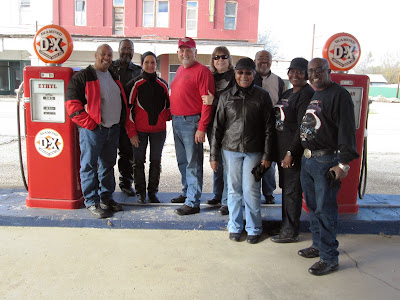 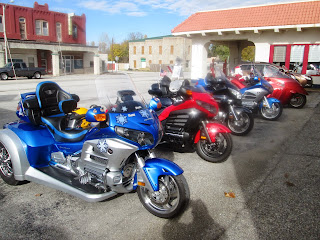 Now remember, all these folks arrived at exactly the same time. And after they all left, not another person stepped foot in the Station all afternoon.  How strange is that?   We're hoping that tomorrow we'll have more visitors and that they come throughout the day.

Cool, a visit from the Mayor!