I had a major attack of pessimism as Ron M. and I drove to Afton this morning.  It was cold -- very cold -- and damp and dark and not at all the kind of day when one can anticipate a great number of cheerful Route 66 travelers to come for a visit.  As it turned out, there weren't a lot, but they were good ones! 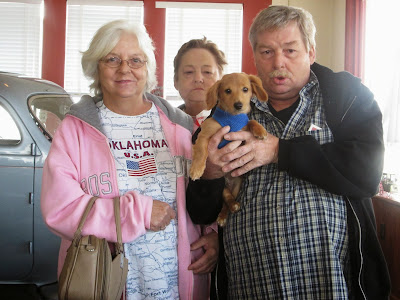 My friend Karen (left) from Owasso, OK, whom I have gotten to know because we're both patients at the same dialysis unit, came for her first visit to Afton Station, and she brought with her husband J.R., her sister-in-law, and their adorable puppy, Cootie.  The pup is less than 3 months old, looks like a child's stuffed animal, and was perfectly well-behaved.  What a nice surprise to see them at the door. 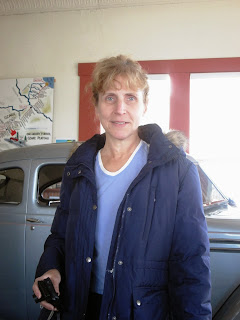 This woman is in the area for the 8th Annual Route 66 Marathon which will be run in Tulsa tomorrow.  She's from New York City and this will be the 43rd state in which she's run a marathon!  I believe she said that altogether she's run in 47 marathons and, although she's not a fast runner, she enjoys looking around, learning about new cities, and taking lots of photos.  The Route 66 Marathon is run near my house every year, and several years ago our '50 Studebaker was the pace car, with David, Ron M., and I having a ball leading the crowd of thousands. 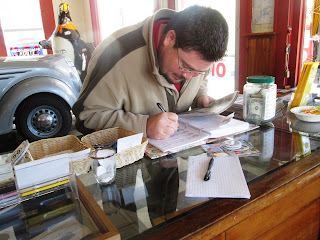 This gentleman from Johannesburg, South Africa stopped in on a partial Route 66 trip while checking out America for the first time.  I think he likes it!    Two other visitors came from Salt Lake City, Utah and Claremore, OK, both first time visitors.

We always have our share of "drive bys" (also known as scoot 'n shooters), people who don't get out of their cars and come in to the Station for a visit but instead take a photo from across the street then drive away.   Nancy Mueller, who owns the famous Blue Swallow Motel on Route 66 in Tucumcari, NM, has begun to snap photos of the drive-bys there and post them on Facebook.  I've decided to start the same practice, and post the photos here.  Today I caught my first scoot 'n shooter with my camera.  Here she is!  If you should happen to see yourself here, just know that we understand you not wanting to get out of the car on such a bitterly cold day, and perhaps you were in a hurry, but we really would have enjoyed meeting you! 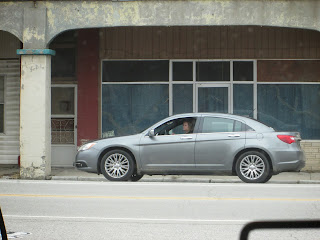 I'm looking into my crystal ball and see one day that "Scootin Shooter" will have a grandchild on their lap talking about the time they drove Route 66. Here is how the story is going;

"We drove down Route 66 once. Had a lot of fun. Here are some pictures."

"Oh, I remember reading about that "Cars" movie that Cars On The Route has the original Tow Mater. Did you get to talk to the people who ran that place?"

"Oh, and I read that Afton Station lady was so nice. And the Route 66 Tattoo Man was always there. Did you meet them?"

"Oh, that lady that runs the Rock Cafe was the model for Sally Carrera in "Cars"! Did you meet her?"

"Grandpa, did you meet ANYONE on that trip?"

"Well, no. But I took lots of pictures."

Now my image is fading out.

This is sooo true, Trevor! Kind of scary to think that people miss a lot of good stuff because everyone seems to be in a hurry these days. For each person who just snaps a picture and doesn't come in, I feel as if I've missed something, too. Meeting the people and telling them about the wonders of Route 66 is my favorite part of the job!