Staying Away In Droves

It was an uncharacteristically SLOOOOOW day at Afton Station today.   I have no idea while this was so.  The weather was actually pretty nice, most schools  haven't started yet, and Europeans are still on the road.  Was it something I said?  I think not.   Sometimes it just happens.   In fact, there was a lot less traffic in general passing by on Route 66 today, too.

We had a grand total of 7 visitors, and they came from Noblesville IN, Tipton IN, Besonçon France, Churchville NY, and Holiday Hills, IL.

This couple visited from Besonçon, France.   (And I'll have you know that I had to do some research to find out how to put that little cedille under the "c"!  LOL)   They were very lovely people with quite the intense interest in Route 66.  See the copy of Images in her hand? I always know that if someone brings a copy of Images I into the Station for me to sign, they've been to visit Gary Turner in Gay Parita, MO.  He always sells them the book and gives specific instruction on who they should ask for autographs.  Thanks, Gary, for sending lots of nice folks our way.  And the autograph thing always makes me feel like a movie star! 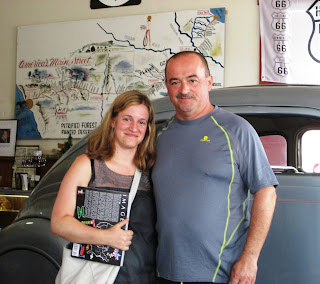 The first visitors today were two guys from Indiana and they were on motorcycles and vests covered with patches.  They are camping their way across Route 66, heading for somewhere near Oklahoma City for the night and hoping to get to Amarillo tomorrow before turning back toward the Hoosier State. 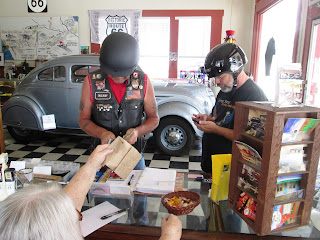 One sure way to tell that it's a slow day is when I find Ron M. walking around taking random photos.  He always seems to get great shots.  Here are today's offerings.  Nice! 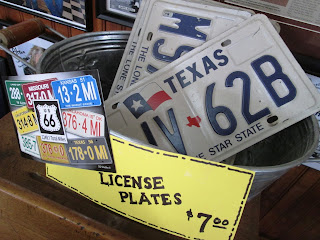 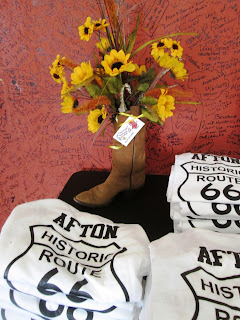 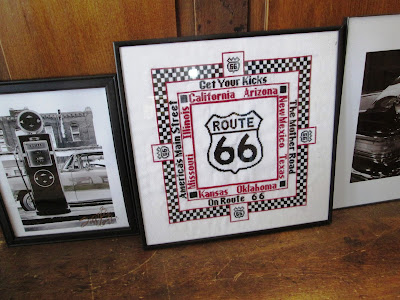 The second picture shows the sunflower-filled cowboy boot that I won as a door prize at the Festival.  It was a contribution from the Kansas OK Route 66 Association.  The Kansas State Flower is the sunflower.

The last photo is of the amazingly intricate cross-stitch won by Ron M. at the Festival.  The remarkable piece was crafted by Sharon Ward.   I think it was the best gift of the entire drawing.