This was a day for groups at Afton Station, but we also had some interesting visitors who were traveling on their own.   Two groups arrived at once in the morning, one expected and one a surprise.   We  are always charmed by Dale Butel's groups of Aussies who visit Route 66 two or three times a year.   This morning his tour group, traveling west to east this time, consisted of 36 of the nicest, happiest, and buying-est (!) folks we see all  year.  As I've said many times before, I love our Aussies!   They came by both motorcycle and car, depending on what they chose when they flew into L.A. 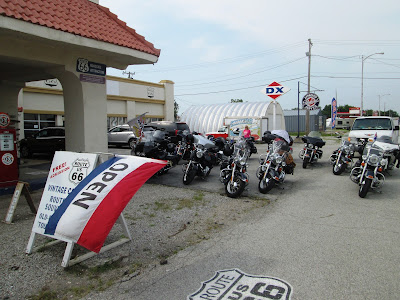 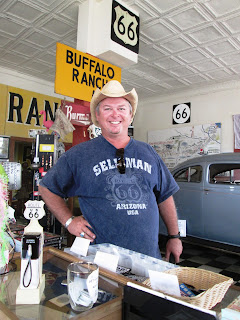 Here's smiling Dale himself.  I take a photo of him every time he comes to visit, and he gets cuter every time.  :-) 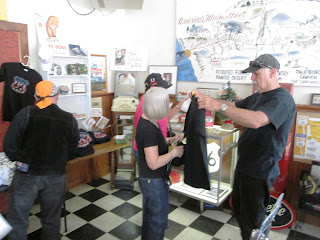 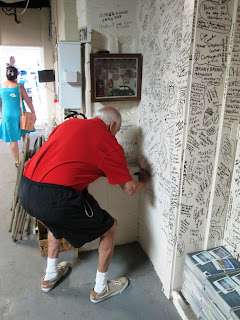 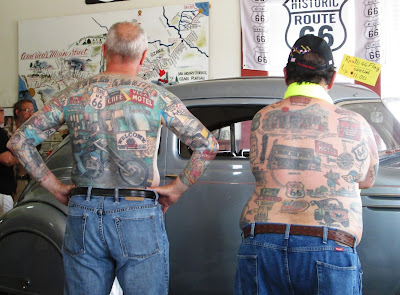 By coincidence, both well-known Route 66 "tattoo men" were together at Afton Station today.  Ron Jones was there to help out as he often is, when who should roll in with Dale's group but Jim Bush from this country who is traveling with the Australians.  Perfect photo op!

At the exact moment that the Australian group rolled in, so did a group from the Looking Glass Corvette Association of Colorado.  Their 15 members came from various towns in the general vicinity of Denver, and they, too, were a fun and happy group.   They're doing a full Route 66 trip in this lineup of pretty cars.

Once the crush of people moved on to enjoy other wonderful Route 66 sites, some individual travelers arrived.   This couple from Kingsland, TX was seriously interested in the possibility of purchasing the old Palmer Hotel across the street, and nothing would make me happier.   However, after quite a bit of maneuvering to find the owner, then over an hour of looking at the place and talking to said owner, it appears that the deal won't go down.  The building has been priced ridiculously high, and although I didn't speak to either party afterwards, I'm going to take a guess that the stubborn owner isn't interested in negotiating.  We shall see. 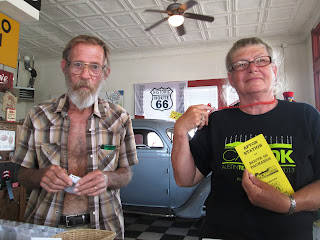 The day ended with a small group of senior citizens from the local Grovewood Assisted Living Center.   Because of a bus breakdown, only a small number of folks could join the tour.  Here are Ruby (the Recreation Director), "Wild Thing" Hazel, Cal, and Gus.   They enjoyed the old cars very much and did plenty of reminiscing. 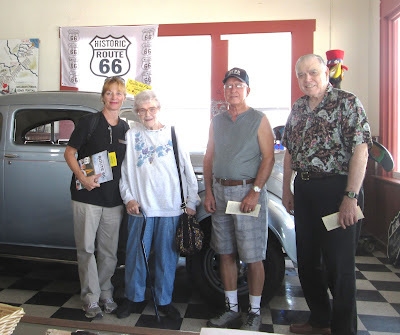 We also had another couple from Australia, traveling independently, as well as couple from Houston, Texas.  Another very satisfying day!
Posted by Laurel at 5:56 PM