Glad You Came Back

I promised I'd be back today with all the scoop on yesterday at Afton Station.  It was such a great day that it wore me out, but I'm all rested and ready to fill you with all the news of who visited yesterday.  It consisted of old friends and new, an unexpected tour group from France, and even a honeymoon couple from Spain!

The day was chaotic but wonderful.  Quite a few Route 66 friends, both old and new, stopped by on their way to the International Route 66 Festival in Joplin.  I was thrilled by that, since I'll only be at one of the Festival activities and I wouldn't want to miss seeing some folks.

The surprise was the visit from a tour group from France, 14 people who were mostly from Paris and its environs.  Once again, I had a chance to practice my dozen French words.  (Some day I may recall a few more from my 8 years of French language lessons.) 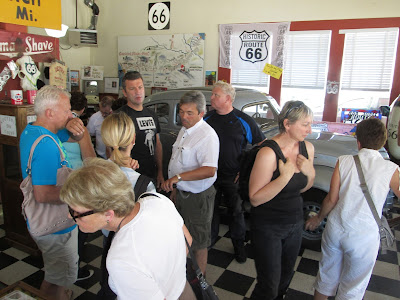 We thought this fellow took on a very "American" look when  he tried on a Route 66 do rag.  Don't you think he looks right at home amidst pink flamingos and a Burma Shave sign! 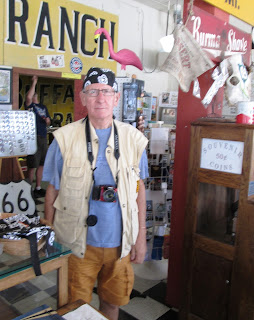 The women from France were intent on buying momentos.  I like that! 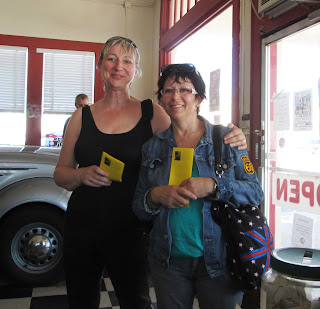 This gorgeous couple from Zaragosa, Spain arrived before the crush, which is good because we had more time to spend with them.   They are on their honeymoon!   Two weeks married, they are touring a good bit of America, including Route 66, of course! 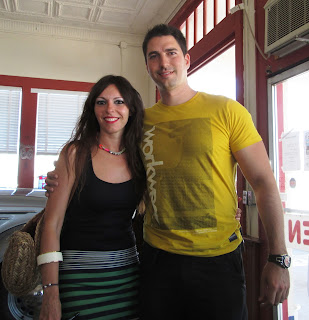 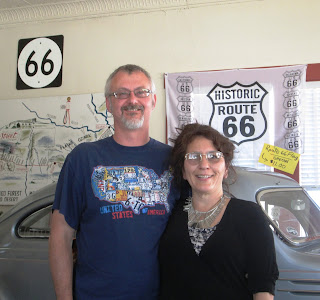 Now for the folks heading for the Festival. . . 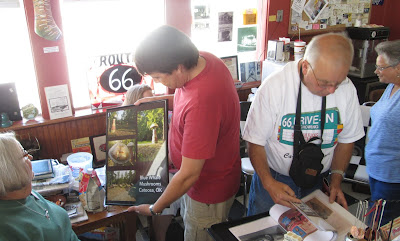 . . . Brad Nickson (Tulsa) and wife LaSandra.  Here's Brad showing me the beautiful poster he made from his photos of the Blue Whale mushrooms.  He'll be giving a copy of it as a door prize at Saturday's breakfast at the Festival.  Others in the photo are LaSandra (hiding behind the poster), Steve Rider from Albany, NY, and Roz Jones, Tattoo's wife from Bartlesville, OK 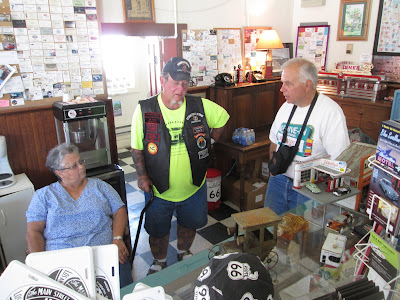 Steve and Roz chat with Tattoo Man.  Steve is a noted postcard collector so we always have a lot to talk about.  His collection is incredible. 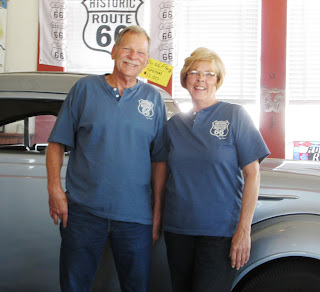 Bob and Robin Swengrosh who own a mom 'n pop motel on Lake of the Ozarks also stopped by on the way to the Festival.  Others who didn't get photographed were Jane Dippel (St. Louis) and 11 members of her family (when she goes to an event, she brings a crowd!), Jim Faber and wife from Santa Monica, CA (he's heavily involved with the Autrey Museum which is mounting a Route 66 exhibit in California and he brought a notebook to show it off), Mike Wallace from Cincinnati, Ohio who rode in on his motorcycle, folks from Long Beach, CA who are involved with the California Route 66 Museum, and Mark Potter, long time Route 66 enthusiast from Lawton, OK.

Thanks to Ron M. for helping me with crowd control (haha!). If I've forgotten anyone, I do apologize.    For the rest of the weekend, it's "iffy" whether I'll have time to do much posting on the blog, but I'll sure try.  I'm sure there'll be much to report on.
Posted by Laurel at 12:32 PM