Business was slow on Route 66 this morning, but picked up nicely in the afternoon.  Most of the morning was spent catching up with the doings of Marly and Robin, who stopped in to chat.  Ron M. was with us, too.  Once Robin left, followed shortly by Marly, more people started to come in, but I'm not... repeat NOT.... insinuating any cause-and-effect here!  :-)

Our first visitors were from Medicine Lodge, Kansas, a couple with their grandson who is a big car restoration fan.  Once they got their fill of our Packards, etc., I sent them down the road to Daryl Starbird's museum, which I think the young man will really appreciate since he loves hot rods and customs.   While the folks were viewing the showrooms, I took the time to look up Medicine Lodge, KS because I thought it was such an interesting name.  Turns out it's where firebrand Carrie Nation started her campaign to break up taverns with her ax at the beginning of the Temperance era.   Interesting, but of course none of that has anything to do with the Medicine Lodge name, which was given by Native Americans many years prior. 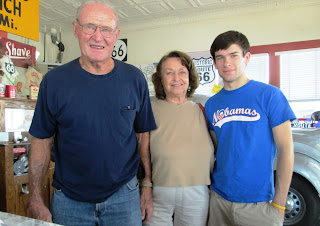 This young couple came from Brussels, Belgium and Barcelona, Spain, although both now live in his home town of Brussels.   They are on a one-year odyssey in which they will drive throughout the United States and then head for Mexico, Central America, and South America. 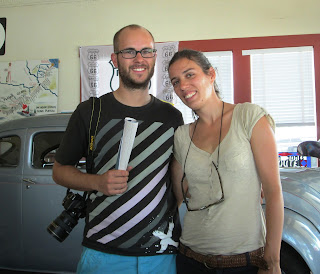 This is their vehicle.  It's a fully fitted-out Toyota which they had shipped over from Belgium and picked up in NYC.  After their one year on the road, they will have it shipped back home from Buenos Aires, Argentina.   By the way, the Toyota has NO air conditioning! 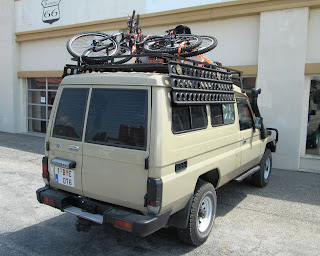 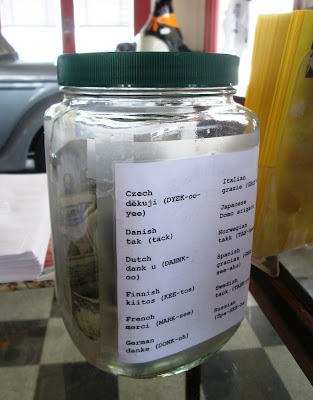 I've decided to reveal my secret for communicating (at least a little bit) with visitors from all nations.  Ron M. was kind enough to look up the words "Thank You" in the languages most spoken by Afton Station visitors, along with the phonetic pronunciations.  I printed it out, taped it to the back of the tip jar and. . .voila!. . . I can at least make a feeble attempt to express my appreciation for their visits and their donations!  So far, not too  many of them have laughed at my attempts.

We also had visitors today from Verdigris, Oklahoma and Joliet, Illinois.  The fellow from Joliet was on a motorcycle and is heading home from a long ride through the Southern U.S.A. and now Route 66.  More tomorrow, so see you then!
Posted by Laurel at 5:33 PM