We were greeted this morning at Afton Station by two couples, one from Diamondhead, Mississippi and the other from Iberia, Missouri who arrived even before Ron M. and I rolled in.   This was just fine because we had to spring quickly into action anyway as we were expecting two busloads of tourists from Methodist Manor  Community in  Tulsa.  So, it was a quick opening.  The Mississippians were in a neat Element travel trailer and are veterans of much travel in the U.S. 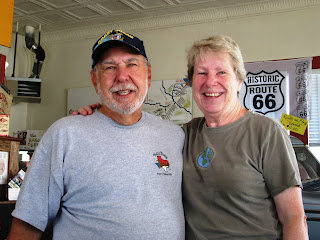 Their two buses were full and gentlemen and women seemed happy to be on a day's outing where, when they left Afton, were to have lunch on the lake in Grove and then take a ride on the Cherokee Queen, the paddle wheeler on Grand Lake. At Afton Station, you will see from the next picture that the line forming suggests that the bathroom was equally as interesting to the group as the vintage cars themselves.   What a nice, happy group. 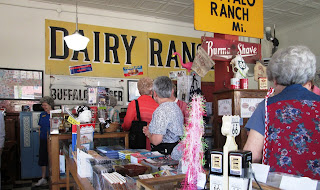 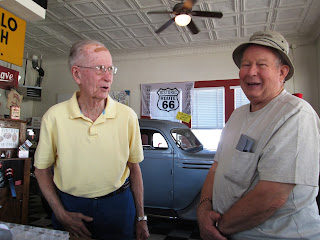 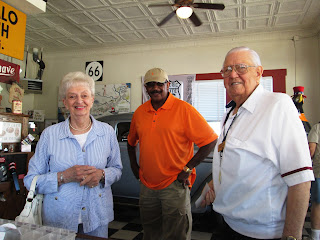 The group enjoyed some cookies I provided, and they certainly enjoyed sharing stories related to the "good old days", with our car collection eliciting memories of drives with their fathers in similar era automobiles.

Later in the day we had more visitors, and they came to us from Dallas TX, Mankato MN, Sand Springs OK, Gotheberg, Sweden and several towns in Norway.  Here are the Scandinavian visitors, headed for California. 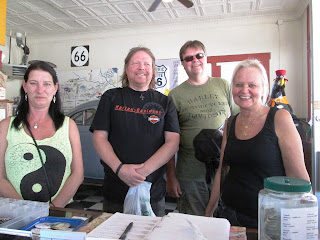