Playing Amid Packards on Route 66

Yesterday was a glorious day in the life of Afton Station.  Unfortunately, the photos I took aren't so glorious.  Therefore, I'm putting out a call to all the dozens of people who were snapping photos of the Road Crew playing at Afton Station -- please send me some good ones!

It was a very busy day right from the start.    Several Route 66 friends arrived early but couldn't stay for the concert since they had long drives ahead of them to get home after the Festival weekend.  Here are just two of them, Jim and Judy Hinckley from Kingman, Arizona.  Jim is a renowned author of many books, among them "Ghost Towns of 66" and the amazing "Route 66 Encyclopedia". 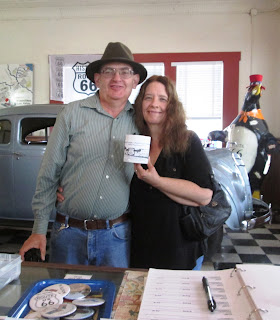 Both Robin and Marly arrived mid-morning and, along with Ron M., were invaluable at getting things ready for the band and the folks who would be coming to watch.  Meanwhile, I was getting a little nervous because it was raining so hard that the street was beginning to flood in front of the Station.  Oh no, any day but today!!   (The rain stopped in time for the water to subside, fortunately.)   A decision had to be made about where exactly to put the band and where to put the audience.  We had no idea what to do about either until Ron M. suggested we put the band between two Packards, in a temporarily empty spot in the front showroom.  That turned out to be the best idea of the day, because it made a very special photo op.

By the time the band arrived, we were ready for them.  Here they are setting up. 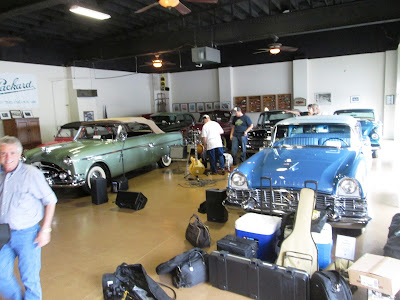 People continued to come in and out all day.  The best part, for me anyway, is that 90% of the audience was old Route 66 friends from afar, people I usually only see once a year.  The audience wasn't quite as large as anticipated (the torrential rain had something to do with that), but it was plenty big and plenty appreciative of the Road Crew. 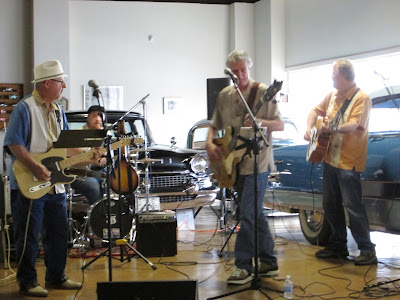 The Crew played for about 90 minutes, all either Route 66 songs or oldies.  They're really GOOD!  They are perfectly suited to be the Official Route 66 Band, which they are.  Additionally, they are four of the nicest guys you'd ever want to meet.  I was in heaven! 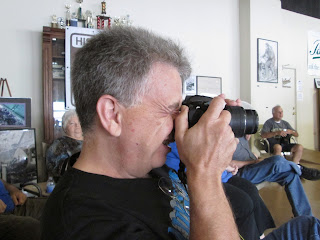 Jerry McClanahan (friend and author of the EZ66 Guide) was one among many taking photos.  (C'mon, Jerry, send me a few!) 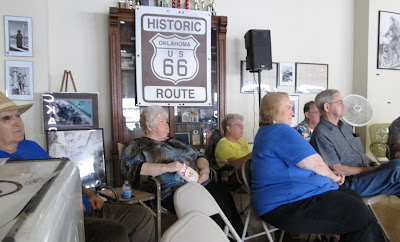 A few of those who were enjoying the music were Mike and Carolyn Pendleton, Sharon and Mike Ward, and Bob and Kitty Harmon (all pictured above).  Do I dare mention others there, with the danger that I'll probably forget a lot of them.  I'll try to remember:  Melba Rigg, Renee Charles, Rick Zimmer, Bob Swengrosh, Madalyn Knudsen, Ron and Roz Jones, Don Gray and wife, Shellee Graham, Jim Ross, Steve Rider, John Schulz, Richard Talley, the Harlows, the Lockes, and. . . oh, this is an exercise in futility.  I'll never remember everyone, so just forgive me.  Maybe when I get some photos from others I'll be able to name more.  Only two citizens of Afton came.  No big surprise.  The others who were there represented states from coast to coast.

Thanks to my friend PJ for making a video of the entire concert.  I can't wait to see it. Meanwhile, here's a bit I snipped from Ron Warnick's blog.  I believe it might have been made by the aforementioned PJ.

Always a pleasure to perform at Afton Station. Had to pass this wonderful place dozens of time as a child with my family. To actually play music in an authentic Route 66 Gas Station is the coolest thing ever! Laurel is the perfect host. We had such a good time. Thank you Laurel for having us. Thanks Ron for the great setup. Thanks everyone for coming!

Great stuff as always. I am sorry I could not attend. I was on my way back to Denton, TX in the early part of the morning. I plan a drive up.