My day at Afton Station started off about 45 minutes before official opening time when five guys from Seoul, S. Korea arrived (unannounced) to film a documentary about Route 66.  The language barrier was rather prohibitive, but when they put a microphone up to my face and made a gesture of talking, I figured they wanted me to say something, so I gave a little talk about Afton, the cars, and Route 66.  I hope that's what they wanted!!  They were nice guys and they stayed for over an hour photographing every detail of every car, so I assume we'll have a prominent role in the documentary. 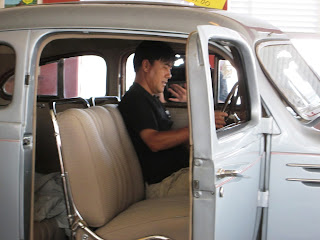 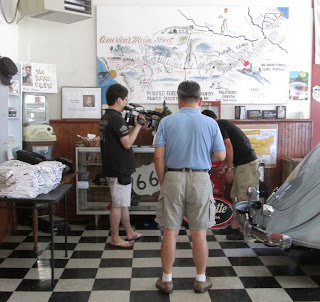 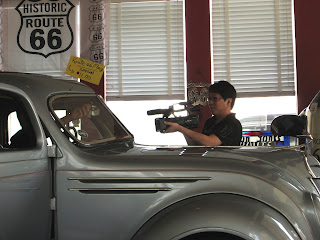 While my new Korean friends were there, a honeymoon couple from Venice, Italy arrived. 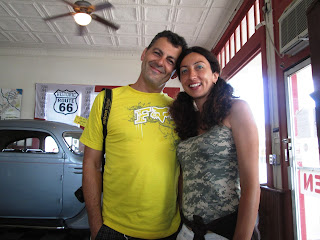 When I asked the Korean team to pose for a photo, they insisted that the Italian couple join in.  Made for a great photo, don't you think? 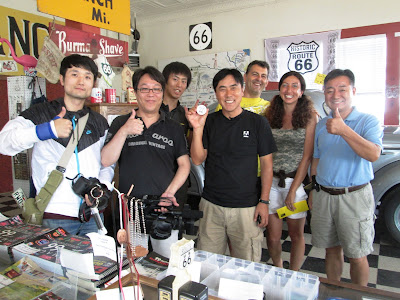 Before the Koreans left, they presented me with this beautiful pendant made of a quilted silk pillow and tiny gold knots.  It's such a magnificent gift!

As the day went on, I accumulated about 30 visitors.   This couple is from Barcelona, Spain. Why do all  my European visitors look like movie stars??  This couple has been married for just a year and are on their second honeymoon. 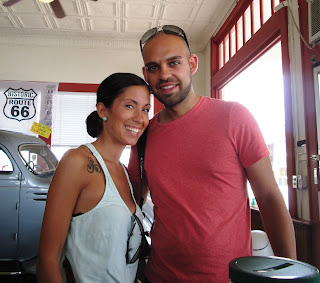 A motorcycle loaded down with packs then rolled in and this lady dismounted.   She just retired and is moving from Richland, WA to Knoxville TN so the big stuff has been sent ahead.  But she had enough gear packed on her motorcycle to manage a vacation " for as long as I feel like it", in her own words.  Adventurous lady! 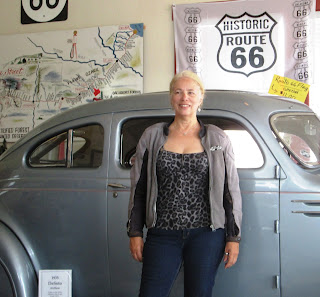 After that documentary shows you'll be famous the whole world over!