Driving down Old Route 66 with thick clouds hanging so low in the semi-darkness that it feels like I am in a tunnel.  Occasional wet splatters on the windshield as I move in and out of indecisive rain, hardly enough to use the wipers except to make sense of the well-worn white lines that mark the road's edges.  I am going to Afton on the same old road at the same old time, morning light creeping in at about the same rate as is my relaxed excitement for my arrival at Afton Station.  Toward the end of the "season", I always anticipate lazier, slower days where, instead of a deluge of visitors, I actually have time to contemplate why I go there and, besides myself, who and what I'm helping by being there.  Sometimes the efficacy of  my purpose hangs in the balance.  There's no money in it, that's for sure.  Helping to promote the Mother Road?  Yes, I think so, but enough?  Maybe not.  I do what I can, but there's just so far one can indoctrinate travelers into the small, slow roads when so many are hell bent on getting somewhere fast.  Teaching Route 66 is an art form of sorts.  One must be a travel agent, a repository of all kinds of facts and data, but mostly one must be a preacher of the gospel. It's not hard to feel the pull of the road, but its considerably harder to impart that feeling to one thinking he must be in Amarillo in four hours when he's actually five hours away.

"Slow down", I suggest, as my sermon falls on deaf ears.  "The amount of living, breathing humanity you will encounter if you hop on the interstate will overwhelm you.  The folks who sit and wait for you, as I do, are just trying to restore life to a road, and they need your help.  Your gift to them is simply your presence.  Do not ever feel unloved on Route 66, as we are a community of lovers unlike any other.  We love you, the animate.  And we also love the inanimate road, its history, and all that's on it. We live for every jingle of the bell over the front door because we know it is you, a potential convert to the Gospel of 66.  If you don't buy anything from us, we don't flinch. But if you say you'd rather hop onto the Interstate, only then do we flinch."
_________________________

This morning, the fly swatter was my best and ONLY friend.  I admit to committing a number of cold-blooded murders over the course of the day. 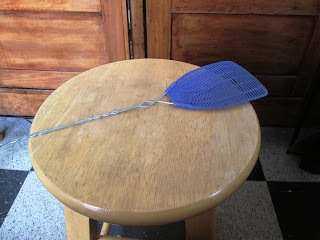 It was totally quiet all morning with absolutely NO visitors until this young man from Rome, Italy walked through the door.  Once again, a handsome, well-dressed European gentleman.   Charming, too.  [Sigh...] 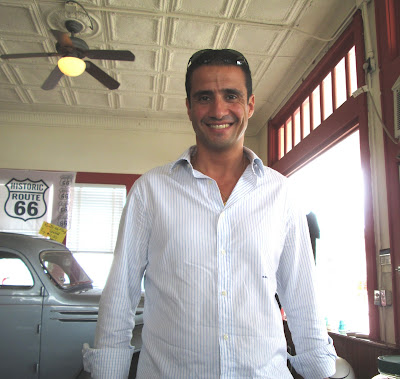 At around noon, another rainstorm came rolling in, the sky darkened again and the deluge began.  Moments later, a pickup truck stopped in front of the Station and two very soaked people -- a young man and woman toting heavy backpacks -- hopped out of the truck bed.  They thanked the driver and he moved on.  I was just about to invite them in to dry off when another truck, this time a semi, stopped and gestured for them to get in.  Ah, Route 66!  Old-fashioned hitchhiking!  I've been humming "Bobby McGee" ever since.

Finally, when it was almost closing time and the rain continued to come down, a father and son on motorcycles (soaked to the skin) came in.  They are from West Harrison, Indiana and are taking a lengthy trip across Route 66.  They often travel together on their bikes.  They dried off a bit and were on their way.  After that, a couple from Farmington Hills, Michigan also paid a visit.  Her father had a '53 Packard, so she was in a cloud of nostalgia as they toured the cars.

And that was my whole day.   Very quiet.  Very satisfying.
Posted by Laurel at 5:49 PM

Interesting musings on a quiet day, sharp contrast to the busy days you've had at Afton Station this summer.