During a few spare moments this morning I wrote a whole little essay about Tulsa Route 66, but I got home from Afton Station so late and with more pressing tasks to perform, that I've decided to post it tomorrow instead of this evening.   Now, I'll just tell you in just a few words about my day at the Station.

The morning started, as usual, with a sunrise.  This one was particularly pretty as I drove across the farmland outside of Chelsea. 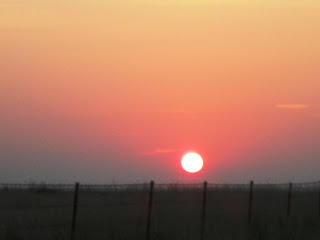 I was alone today at Afton Station for the first time on a weekend in months.  I was a little worried about being overwhelmed by visitors, but although there were plenty, I had enough time to chat with all of them individually. 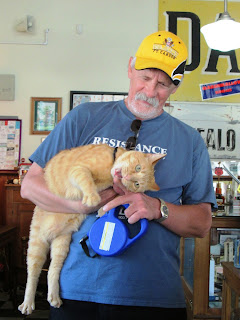 My first visitor was an old Route 66 friend, Larry Kinsey.   Heading back to Kansas after a lengthy trip, he was accompanied by his kitty Genghis on this visit.  Genghis is a very big and very lovable cat.  Larry is the guy who got me interested in playing the Indian flute, something I still enjoy even thought I can't even play one song all the way through.  We had a nice visit. 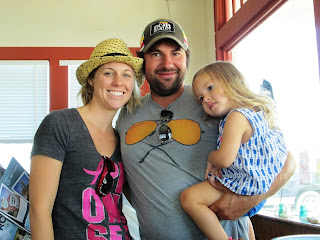 I enjoyed this family who was taking a little weekend drive from their home in nearby Ketchum.  Little Stella is a beautiful child and as sweet as can be! 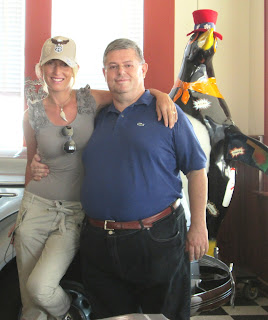 This couple lives near one of my very favorite cities, Venice Italy.  They are having a great Route 66 vacation, even though in this photo they have a giant penguin looking over their shoulders!  Yikes! 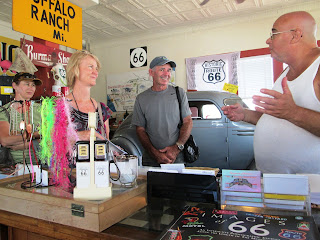 A local fellow from Grove (on right) arrived just before this family from Aukland, New Zealand came in.  The couple from Aukland and their daughter had some questions about American Indians, and since Randall, the local man, is a Native American himself, they were afforded some good information and will definitely be visiting some Indian reservations as they move further west on Route 66.  They bought a 5th-wheel RV and a pickup truck when they got to the U.S. and got a buy-back agreement from the dealership so they could sell it before return to N.Z. in a few months.  But now they're thinking of just storing it for another trip next year.  I hope they come back!