The Wearin' of the Green in Afton, Oklahoma

Happy St. Patrick's Day from Afton Station.  We didn't do much to celebrate there, but I did wear an embarrassingly mismatched green outfit.   Betty, Ron, and I held down the fort in the morning, and had absolutely no visitors.  Was everyone at parades?  Hung over?  Betty had to leave at noon, and I joked that as soon as she left the people would undoubtedly start to arrive.  As it turns out, I was right!

Moments after Betty walked out the door to her NEW car, people began to roll in.  Two bikers from Wagoner, OK stopped to scope things out for the upcoming "Passport Oklahoma" motorcycle run, which begins in April and ends at the end of November.  During that time, hundreds of bikers will be traveling across the state with passports naming 20 sites along Route 66.   They must take a photo of themselves in front of each site in order to qualify for prizes.  We are fortunate enough to be one of the official sites, so we feel fairly sure we'll have an increase in motorcycle visitors this summer.  Yippee!  Love it! 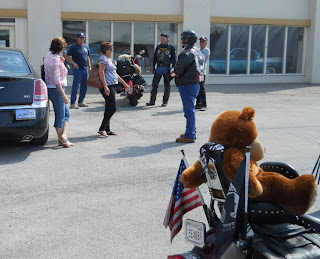 At the same time, a carload of four people from Brisbane, Australia came for a visit, and they met the bikers in the parking lot for a little chat before they came in. 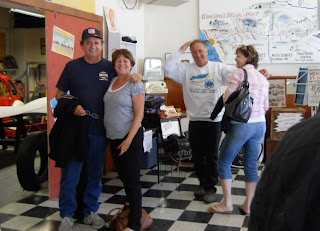 I have such a fondness for Aussies.  These four charming folks were no exception.  They are traveling Route 66 from west to east, and will go on to New York at the finish of their one month trip.  Not only were they great folks, but they also each bought a sweatshirt!


Other visitors were from Missouri and Owasso, OK.   The grand total was 11.   The Aussies stayed a while, so I was a bit late getting home, but it was entirely worth it.   What  looked like it was going to be a lifeless day turned into a jolly St. Patrick's celebration after all! 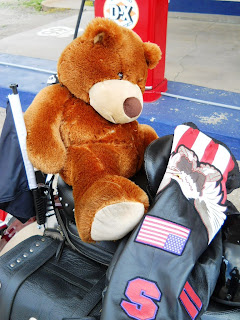 Our biker visitors both had teddy bears strapped to the rear seats of their iron.  Not sure if this has any special meaning, but I've often seen bikers with stuffed animals riding behind.  Is there special meaning to this?
Posted by Laurel at 6:13 PM