Thursday on Route 66 -- Short and Wet 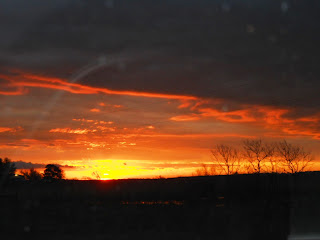 I thought the beautiful morning sunrise was a sign that it might be a nice day, but I should  have paid more attention to the low clouds and less to the rising sun.   As it turned out, it was another day of rain, rain, rain.     Nevertheless, I drove to Afton early, stopped in Claremore for breakfast, then slogged through the sog on Route 66 to the Station.

It wasn't a total washout of a day,  however.   Phil was kind enough to show up to help out in case of crowds -- crowds we never had.  But we had a great day of hanging out and chatting.  Our guests numbered only 5, and since one of them was a salesman, I ended up buying more than I sold!   Gene, the salesman from Missouri, had some flags, shirts, and static cling stickers that I needed.

The other visitors were a couple from Caddo, OK in the morning and two gentlemen from South Chicago, IL in the afternoon.   The Caddo couple are veteran Route 66 travelers who were interesting guests.  They had some great stories, one being about their travels in an RV to Alaska, where they saw a semi tractor trailer truck get pulled out of mud by a circus elephant, thus alleviating an hours-long traffic jam. The Chicago guys were big vintage car fans, and Phil gave them a long tour of the car showrooms.  One of the fellows has a '55 Packard which he'll be using to transport a bride and groom in a few weeks.

When the clouds got very heavy and the rain started again after a brief pause, I left the Station in the good hands of Phil and headed for home early.  I have a dinner engagement tonight and I didn't want to be made late by unfortunate traffic conditions. 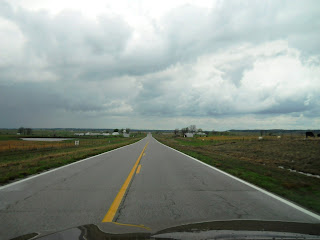