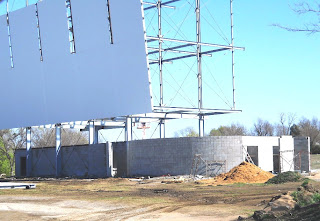 My little photographic journey this afternoon turned out to be a bust.   I had heard this morning on the radio that there would be a fly-in of one of the old Tuskeegee Airmen planes from WWII at the Tulsa Air and Space Museum at noon.  On the way there, I stopped at the Admiral Twin and was disappointed that not more had been accomplished since Tuesday.   The concession building is coming along at the base of the screens, and it looks like it will be an interesting structure with rounded ends.  But I'd rather see the screens going up faster.

At the Air and Space Museum, I waited until about 12:30, at which time I decided I was either at the wrong place or it was the wrong time.  There were no other people watching the runway behind the museum.  I snapped a few photos of the museum and the planetarium, then just came home.  Later, I found out that there will be fly-in tomorrow at 5 p.m., but I know I wasn't wrong about the one at noon today. Or was I? 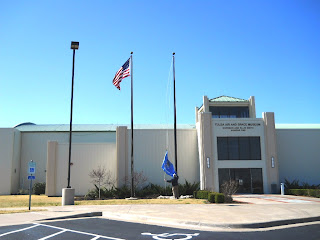 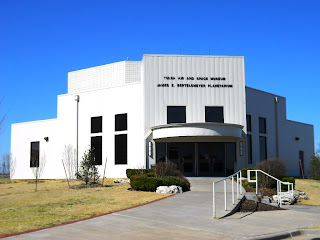 I'll be in Afton Saturday and Sunday, so maybe the blog posts will be a little more interesting.  :-(