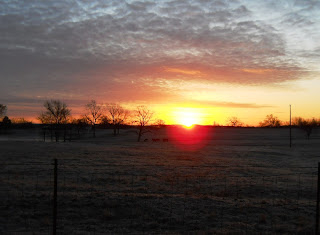 I left for Afton Station a little earlier this morning because I wanted to be out in the country in time for sunrise.  I was rewarded by a pretty dawn near Claremore.  Does everyone feel as I do, that the variations of sunrises are quite amazing?  I've never seen two alike.  This morning there were some low clouds which added to its majesty.

This was my first Sunday back at Afton Station since December, so I really wasn't sure what to expect in regard to numbers of visitors. After breakfast at Eggbert's on Route 66 in Claremore, I still had some time to kill, so I decided to take a ride on the 9 foot highway out of Afton.   It's so incredibly disappointing to see how it is being ruined by the dumping of gravel on it, covering not only the road bed but in most places obliterating the iconic curbs.  Since the county doesn't seem to be willing to do much about it, I started having fantasies of rounding up a couple of dozen volunteers with shovels to move the gravel off of the curbs -- not the roadbed itself,  just the curbs.   However, dealing with two sides of a 4-mile road would probably be close to impossible.  It's a thought. . . .

It wasn't a particularly exciting day at the Station, but we did have four very nice couples drop in, plus a long haul trucker taking a break and wanting to see the cars.  Our visitors came from Tulsa and Pryor OK, Holton KS, San Diego CA, Pittsburgh KS, and Monett, MO.   At various points of the day, Robin, Phil, David, and Marly all came by.   Marly helped me close up after the last group left at 3:15.

I took a better photo of the stained glass piece which Robin gave me for my birthday.  It really sparkles when it's put in the window.   When Tattoo Man saw it last weekend, he immediately ordered one for himself with his name on it.   Robin has only been working in stained glass for a short time and this is one of her first larger creations. 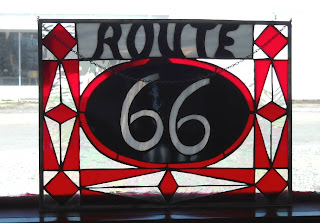 It's winter, but it feels like summer, and looks like autumn.  Here's a shot of a pretty stretch of road near Claremore.   My car thermometer was reading 75 as I drove home this afternoon.  Ahhhh... perfect! 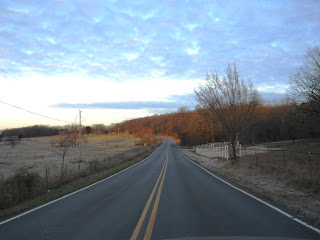 Psalm 19
1The heavens declare the glory of God; and the firmament sheweth his handywork.