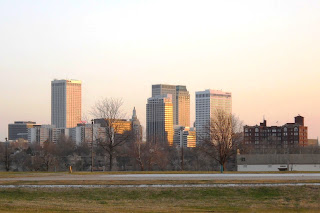 It isn't unusual for me to wake up in the morning with a burning need to get lost.  I'm not quite sure what that says about my mental stability, but I'm admitting it here because this is the place where I admit things.  The need to get lost is as strong or stronger than was my need for a cigarette back in the '60s when I was, shamefully, a smoker.  But the addiction to "lostness" is harder to explain than that of nicotine.   It's a need to be someplace I've never been before and where I'm not quite sure where I am or in which direction is home. It's a need to see things all around me that I've never seen before.  And it's strong.  Very strong.

Generally, this need has to be subjugated because there are real-life tasks I have to perform. Today was not such a day.   I had lots of time to roam.

The second part of my crazy addiction is the occasional need to see manufacturing in action.  This can be very difficult in the Tulsa area.   When I was a kid in Cleveland, Ohio my dad, at my request, would take me down to the waterfront where we'd drive around the big factories and warehouses on the shores of Lake Erie. Or,  he would take me to his own factory, where I had free rein because I was the boss's daughter, and I got to watch the giant machines turn sheets of steel into bed springs. When I lived in Buffalo, New York in the late '60s and early '70s, I'd drive to South Buffalo where the steel mills were still growling and putting out great plumes of smoke.  I can still smell that oily aroma, long gone now in the age of pollution suppression.   The last time I was in Buffalo, I went there again, only to see the rotting hulks of the few mills that haven't already been razed.  The oily aroma still lingered , however.  But maybe it was all in my head.

There isn't much heavy manufacturing in Tulsa, Oklahoma (or anywhere else in this country any more, from what I hear), so I have to make do with what I can find.  Here, the oil refineries come the closest, but they're all closed off with fences, gates, and barbed wire.  At least I can get a whiff of one of them occasionally as I drive past.

Anyway, this morning I needed to get lost, preferably in an urban setting.  I drove north of town and headed randomly toward Sapulpa, but NOT on Route 66 for a change.   Lo and behold, I came upon an area of small to medium manufacturing facilities, and indeed I was lost there.  I have no idea where I was, nor was it entirely satisfying, but for a short time I got that old feeling, just watching the workers pull into the parking lots and rush toward their jobs, lunch bags in hand.    They probably thought I was a stalker, just sitting in my car and watching.  I truly don't think I could find this place again, despite the fact that it can't be more than 20 miles from home.  But I came home feeling refreshed in the knowledge that life goes on in the world of manufacturing.  It's not quite the same, but it will have to do. 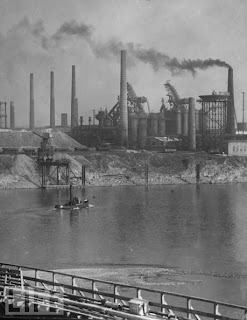 Smoke of a brick-red dust
Winds on a spiral
For a hidden and glimpsing moon.
This, said the bar-iron shed to the blooming mill,
This is the slang of coal and steel.
The day-gang hands it to the night-gang,
The night-gang hands it back

I had a nice visit yesterday from Rich Dinkela, or as he calls himself,  "Roamin' Rich".  He's the fellow from St. Louis who drives Route 66 in a SUV and paints shields on the roads as he goes along.  The hood of his car is covered with signatures of the people of Route 66.  I signed the hood several years ago, but the signature had worn off somewhat, so he met me here at my house so I could re-sign it.  He's on his way back from California, and along the way he's stenciled dozens of shields.  He does this out of his commitment to Route 66 and not any other reason.   Yesterday, after he left Tulsa, he stopped at Afton Station and painted this one for me.  It's in a perfect spot for photo ops when visitors come to call.  Thanks so much, Rich! 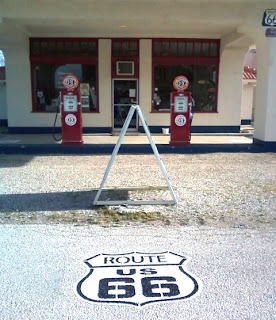 I also met yesterday with a young woman who is doing her Masters thesis on Route 66 and is using some of my images for it.  I expect this will be a very impressive and unusual project, and she intends to publish when it's done.   More about this later.