Much to my disappointment, as well as that of the two people who called me a few minutes ago while sitting in their cars in front of Afton Station,   I did not open today.   If you hadn't heard, we have been  having a deluge for the last 24 hours, and after receiving Emergency messages from NOAA  warning about all the flooded and impassable roads between Tulsa and Afton, I decided to do the wise thing and stay home.  Now, the rain here in Tulsa is subsiding, but I believe it's still going strong up that way.

I did not waste the day, however.   First, I put together the GroLite and frame I bought recently.  I had no idea how huge it was until the box arrived at the door the other day.   I've decided that I'm the only person who's ever ordered one that big who wasn't growing marijuana! ( Hmm... there's an idea).   But seriously, I hope to start my herb garden from seed this year, so I should have enough herbs to supply the whole town.  I had to rearrange my kitchen to accommodate the giant thing.

After that, I decided to begin on a project I've been putting aside for about a year.  It's a 6 ft. tall cartoon drawing on  presentation board of a D-X gas station attendant with a hole where his face should be.  In keeping with my theme of "old fashioned tourist trap", we thought it would be fun to have a place where folks could put their faces through the hole and have a picture of themselves pumping gas.   I didn't get very far, just a rough sketch of the head, but at least it's a start. 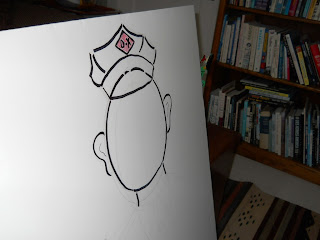 Then, when the rain had been reduced to a drizzle and I was feeling housebound (because as you know, I feel housebound after about three hours at home), I decided to take a drive over to the Admiral Twin to see how it's coming along.  Progress on the screen is slow, so I assume they're working on the concession stand below it now.  Today they were not working in the sea of mud at all, and I suspect yesterday was the same. 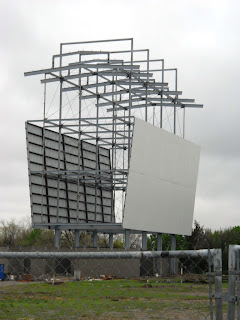 This rain is causing everything to get very green, and the flowering trees are all in bloom.  This is, in my opinion, the prettiest time of year.  Enjoy it!