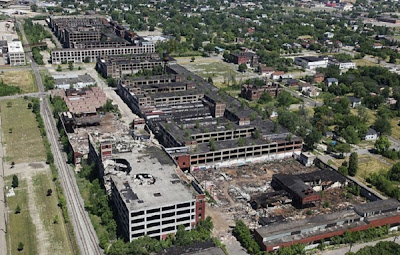 Even though Afton Station is half  Route 66 visitors' center and half a Packard vintage car museum, I tend to write mostly about the Route 66 aspect of the place, since that's my forte.   I love the Packards (and the few others makes we have), but I admit to not knowing as much about them as I do about my beloved Route 66.

On the other hand, I do know quite a lot about the place where Packards were made -- the enormous half-mile-long, 35-acre plant on Grand Avenue in Detroit, Michigan.  And, as I've mentioned previously, I love old manufacturing facilities.  I find them to be romantic icons of America's producing past.   The Grand Avenue Packard plant, in my opinion as well as that of many others, was the No. 1 premiere example of the Golden Age of Auto Manufacturing in America. 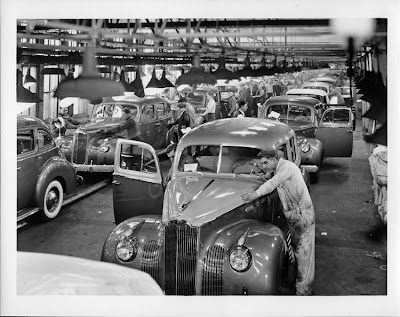 The production line was shut down there in 1957.  Sadly, now the Packard plant is the largest abandoned factory in the world.  Key word: abandoned.   In fact, it is as good as gone,  having been dismantled piece-by-piece over the years by vandals, souvenir seekers, and the ravages of time.    I was there about 15 years ago, and I'm still haunted by the memory.  My then-husband David found a broken window and entered, but I was too chicken to do so, and besides I needed to stand guard in case there were any repercussions to his trespassing.  There weren't.  From what he told me, along with the myriad articles I've read about the fate of the old factory, there's not much left inside.

Until my friend Gordo sent me this online article yesterday, I had only hard copies of literature about the crumbling of the historic factory.  But now I can share this with you.   It's a fantastic article, and has some remarkable, nostalgic photos and very interesting facts.  Please have a look:   http://tinyurl.com/84y8kkl. 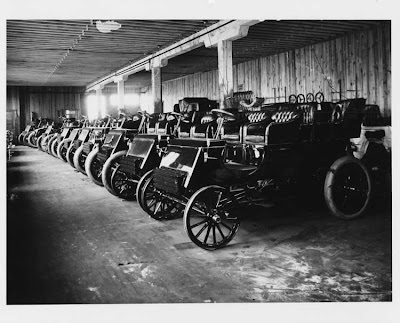 Packard had a long and noble history. They built the Merlin engines had powered the P-51 Mustang fighters and PT Boats in WW2.
Their cars were some of the most elegant models on the road in the 20's and 30's. The Army bought a bunch of Packard Clippers and they were greatly prized by officers who got one. Since those cars were common-keyed, officers would put a hasp and padlock on the door to keep someone from "borrowing" it.

I'm glad people like you are keeping the legend alive.