It's always strange when a slow day follows a busy one. These two weekend days couldn't have been more different, and yet both were interesting in their own way. As you know, yesterday was a mad rush of people and vehicles and we could barely keep up with the crowds.

Today, not so much. There were only three actual visitors all day, "actual" meaning newcomers on tour. They came from Harrisonville, MO and Rogers, AR. Most of our day was taken up with a photo shoot. Rick and Richard from Cimarron Photo and Design in Oklahoma City, which is producing a film about Oklahoma Route 66, came back for the third time to shoot Afton Station for the film. Today they returned specifically to take still photos of me to run during the interview which I gave a few weeks ago. Well, you know how much I hate having my picture taken. I expected this to be torture, but the guys are so nice and so friendly that they made it fun. Plus, Richard promised to Photoshop the hell out of my photo, so I'm not going to worry about it. He said he'd make me look like Marilyn Monroe. Hey, he's a photographer, not a magician! Anyway, here they are setting up. I don't look happy! 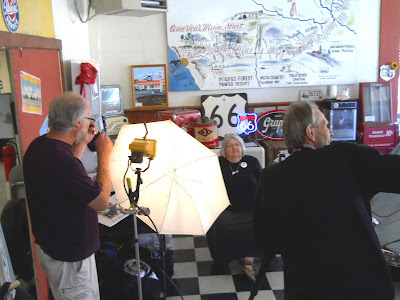 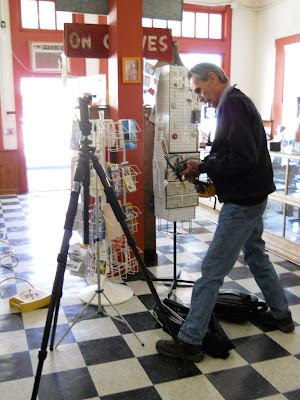 . . . and here's Richard in the car showroom getting some more shots. We got to see the photos they'd taken on previous visits, and they're really, really good! 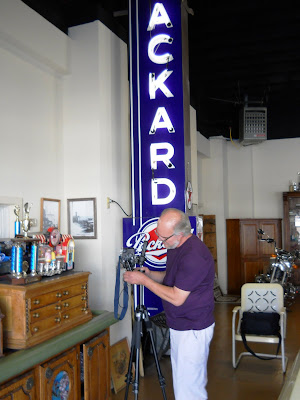 This slow tourist day may signal the end of the busy season. But I'm not giving up just yet. We'll be open 7 days next week, and probably won't reduce hours until several weeks into November. So, see you on Tuesday!