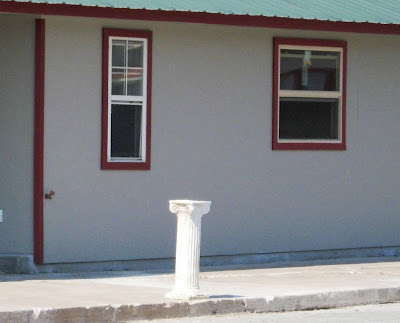 Is Afton going Greek? This column is the latest addition to Route 66 as it passes through the town. It joins the 8-burner commercial stove and the pink bathtub, both of which have littered the street for months. The column is Ionic, it's ironic (since it has appeared just prior to Clean Up Day), and since it's on Route 66, I guess you could call it iconic, too. You never know what might show up along the side of the road in Afton, Oklahoma.

Today was Robin's birthday, so we celebrated with a little chocolate cake and one balloon. :-) Our Afton Station birthdays tend to be a little lame because we keep getting sidetracked when visitors come through the door. Today, however, we had some quiet time in which to congratulate Robin. 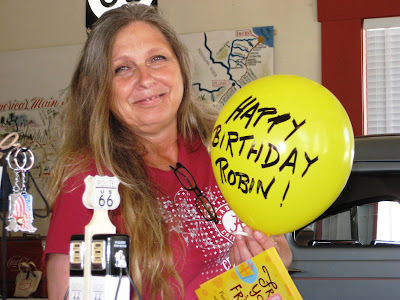 There was a really nice article about me and my postcard collecting habit in today's Tulsa World. If you'd like to see it, go to http://tinyurl.com/LaurelTulsaWorld. I think it's good, but I'd like to hear other opinions. There were other things I would have liked to have said, but I talked the ear off the poor reporter as it was. Here's the guy who did the article, Jason Ashley Wright. 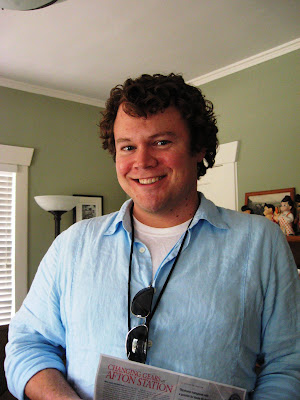 He was a joy to meet and talk to. Nice guy and good writer. And thanks to Ron M. for "nominating" me when Jason put out a call for "interesting" people to interview. Ron is not only a good friend, but also a crack publicity agent. LOL! (P.S. I'm not that interesting.)

Today's visitors came from near and far. . . mostly near. In fact, everyone came from Oklahoma -- Grove, Spavinaw, Afton, Moore -- except for one young man on a motorcycle, from Miyazaki, Japan. I think the overseas travel season is winding down now, but there is still a lot of traffic in August and September, so we're still open 7 days a week.

Pastor Ted came by to talk about the Clean Up Day. He's keeping up his work toward the event despite serious illness, and I must say he's a committed and dedicated man. I wish him well with his medical complications and hope he'll be strong enough to participate fully on Saturday.


I think I'll close with this morning's sunrise. 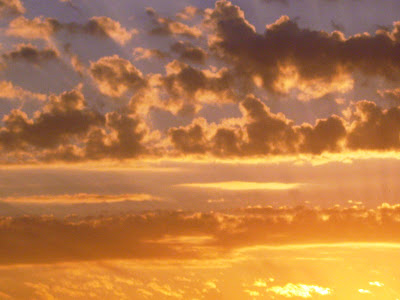 Haha, don't you love coming across things like that that are so out of place? I remember when Shane and I did Chicago to St. Louis, we followed this little trail along the road and came to this fence. There were two rubber boots stuck on the fence posts. Wha...?

I thought that was a great article! He did a nice job, and I think you're a lot more interesting than you give yourself credit for. :)

The morning sunrise was surely beautiful . I posted about our visit to your museum here