NOT a dry heat! 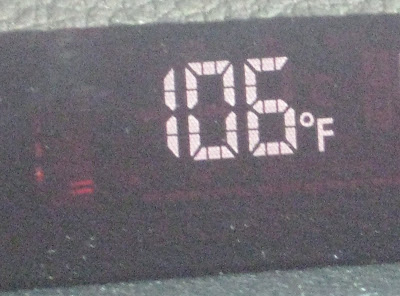 Yes, that's 106 degrees. And yes, that's what my car thermometer read on the way home from Afton today. It's really no wonder that we had a low number of visitors.

A few intrepid folks braved the heat, however. Early in the day, when it was still relatively cool, a couple from DePauw, IN arrived on their motorcycle. They were cheerful about their ongoing adventure, and I guess you could say that today in Oklahoma will give them a little preview of their ride across the desert later in the week.

Another intrepid traveler from Champaign, IL came to take some footage for a video he's making. The last time he came to Afton we weren't open, so he returned to continue his project. Note his cool Illinois license tag! 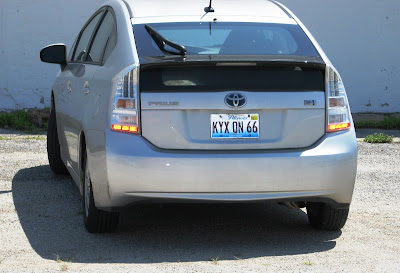 Later visitors included folks from Joplin MO, Clayville NY, and Marcy NY. The New York guys were pretty much soaked in sweat when they arrived on their motorcycles and were quite grateful for a little time in our air conditioner.

In other news, we are getting a new neighbor. The boat cover maker who has been renting the old Cox Grocery building to our north is trading buildings with the auction house who rents down the street. We think this is a good thing, since the auction house will surely bring more folks down to our end of town than the other business. Ron M. jokingly suggested that we are becoming Afton's "art district". To appreciate that comment, you must see and experience the town of Afton. Art District my foot!

In yet more news, a month or so ago I loaned my entire Afton postcard collection to a local lady who was making a slide show to be shown at the Afton High School reunion. Today she brought the finished product to me and Ron M. and I watched it on my laptop. I plan to talk to the creator of the CD about getting her permission to put it on Vimeo, for everyone's viewing pleasure. . . or at least for the pleasure of those who are interested.

Ron M. and I are both victims of the same demonic crud that has been living in my sinuses, chest and throat for several days. It was probably a good day for a low visitor count, since neither of us had a lot of energy for being gracious hosts. We survived, however, and I know that I, for one, will be just fine for the holiday weekend.

By the way, we will be open Monday afternoon, the 4th of July. A group of Norwegians will be coming through, so Marly agreed to open up at about noon until 2 p.m. or so. So, if you're in the area, please stop by. I can't be there, but I wish I could!
Posted by Laurel at 5:38 PM