I didn't expect such a mob scene this early in the traveling season! They came from everywhere to Afton Station today, 41 in all, and I was alone for most of the day, too. It was fun, but I'm exhausted. Marly and Phil stopped in early and helped me to open up, and Betty W. came at the end of the day and helped with closing. In between, I met some lovely folks. 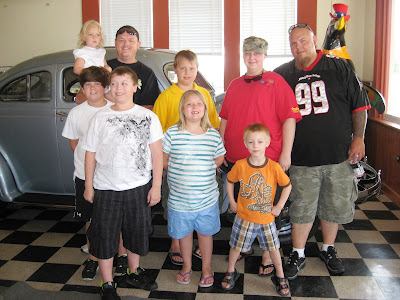 Here's a BIG family from Jackson, MS. They're in the area visiting relatives and decided to see what Route 66 is all about. I think the kids loved it!

Four guys from Cologne, Germany came by on Harleys they bought when the arrived in the States and will ship back to Germany at the end of their tour. A New Zealander was in a rented Mustang convertible, and although he said that he was at the head of a group of 5 other Kiwi mustang drivers, the others never showed up, nor did they drive past. I guess he was WAY ahead! Terry Hembree, whom I know from the past, came in to let me know that he's set up a website for the Joplin tornado. I just took a look at it, and it's quite comprehensive. Check it out and www.joplinmotwister.com.

On my way home this afternoon, I drove past the Admiral Twin Drive-In site, and I'm pleased to report that land clearing and excavation is finally beginning for the new screen. I believe I recall that the owner said it should be ready for reopening in July. Remember, it burned down last summer.

I'll be missing in action here at the blog for a few days while I take off for Amarillo, TX to attend the annual International Route 66 Festival. I look forward to seeing my Route 66 friends from all over the country, and I'll return to Afton Station (and blogging) next Tuesday. 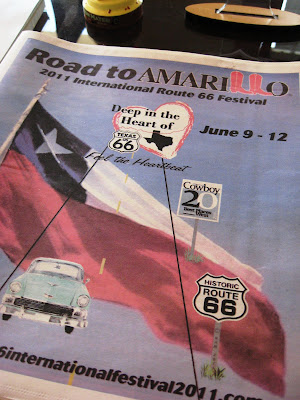 The groundbreaking ceremony for the new Admiral Twin (near I-244 and Memorial) is this Saturday, June 11, at 10 a.m.

Well, they're lying. I distinctly saw ground being broken this afternoon! LOL! I guess they mean the official Ground Breaking.

Yeah, they said to bring a shovel!