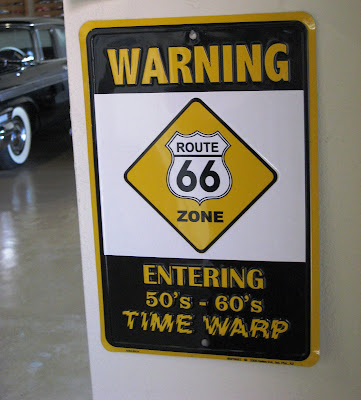 I guess "the blahs" is the best way to describe my mood today. I think I'm coming down with a cold, so that's probably the reason. It certainly doesn't have a thing to do with my visitors to Afton Station today. They included Ron M., Betty, Tattoo Man, Phil, and 20 others.

Those 20 others came from Fairfax CA, Mt. Morris IL, Haltom City TX, Warsaw MO, Bloomington IL, Jackson TN, Bartlesville OK, Bristol TN, Ketchum OK, Franklin TN, and Virginia Beach VA. Greeting three couples from three different towns in Tennessee was an odd coincidence for one day, since we rarely have Tennessee visitors at all. The man from Ketchum, OK came in his truck which is fueled by compressed natural gas. The couple from Virginia Beach visited for the second time in four days, as they're staying around the area doing family genealogies. They are the kind folks who gave me the photo of his father's gas station in Afton in the early 20th century. With Betty W's help, they have made some progress on their family history. And here's a very nice couple from Texas. Tattoo Man is showing them a picture of himself in David Wickline's Images book. 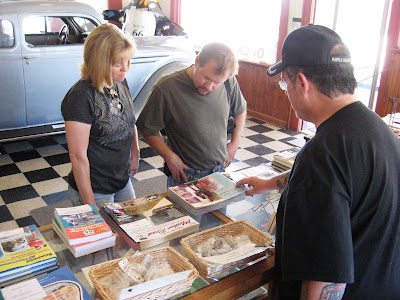 When we arrived at the Station this morning, we were greeted by a calling card left by a horse. Ron M. felt it was necessary to photograph it for future generations. 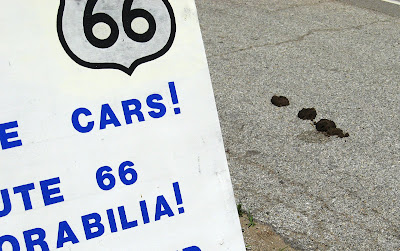 And now, if you'll excuse me, I'm going to bed. I feel sort of like the above picture. :-(

I mention you in my prayers every morning. I'll pray that you feel better tomorrow.

Oh no! I hope you feel better soon, and that a good night's sleep left you feeling bright-eyed, if not necessarily bushy-tailed! :)