. . . always a roadie! I have proof. My oldest friend Sue (with whom I've continuously communicated for 60 years) sent me a precious gift. Beyond precious! An envelope arrived on Saturday containing some old postcards. . . but not just any old postcards. These are postcards sent from me to her, back when we were kids. I traveled a lot with my parents, and Sue was always the first to receive a postcard from me. The three I'm posting here show, among other things, a vast improvement in my penmanship.

This one was from 1953, when I was 7 years old, and traveling with my folks in Florida. I wasn't very articulate, but oh, the memories! 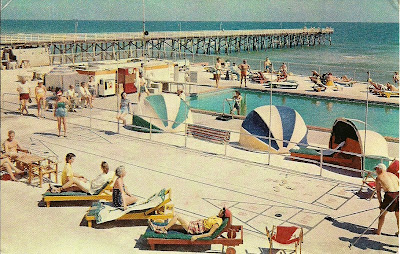 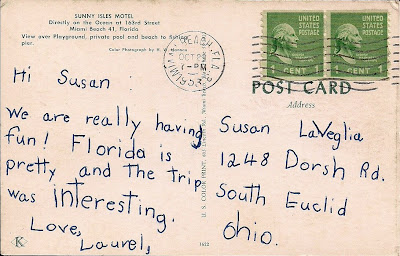 Next, another one from Miami, this time in 1956 when I was 10. I was a creature of very few words, but I still had a big interest in lodging places. The iconic Eden Roc Hotel had opened just a few weeks before we arrived in Miami Beach, so we got to take a tour. 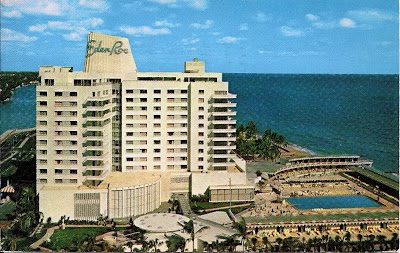 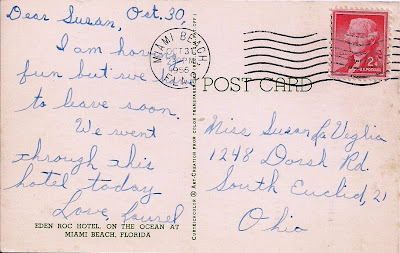 Skip to 1960, on one of my many trips with a dad who had an obsession with history, particularly the Civil War. We visited tons of battlefields over the years, but I'm pretty sure I was more intrigued by the swimming and miniature golf! 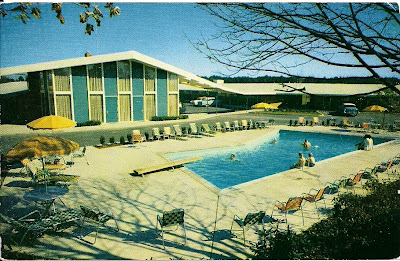 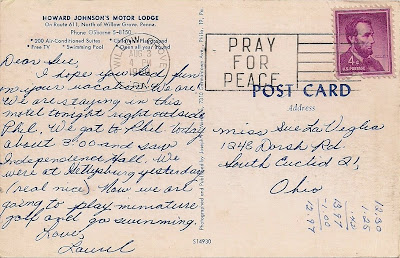 Now for a very cool mystery. Yesterday at Afton Station Ron M. was leafing through his latest issue of Shutterbug Magazine when I heard him utter "Omigod!" Why? Because this is what he found there: 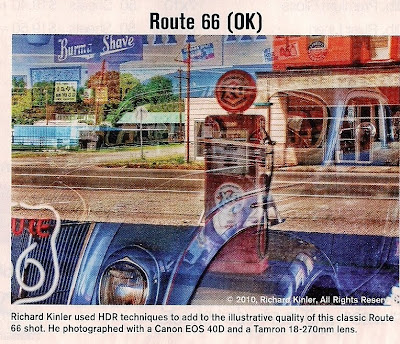 The image was in the magazine's "Creativity" section, where anyone can submit a photo based on the theme of the month. The theme for this issue was Reflections and yes, that's Afton Station's gas pump, DeSoto, and the building across the street reflected in our front window. We have no idea who the photographer, Richard Kinler, is. I've tried to find him online and on Facebook, but with no results. I want to compliment on his photo and see if I can get some copies. I'd love to have it made into a postcard too, with his permission. If anyone has any bright ideas, let me know.
Posted by Laurel at 1:27 PM

Cool how she kept those for 60 years.

One of my best friends, my deaf friend Robin West, has been like a sister to me for about 25 years.

You've probably already thought of this, but in case not--There's a Contact tab at the top of the Shutterbug home page with several phone numbers and e-mail addresses. They might not give you the photographer's personal information, but maybe they'd be willing to pass your contact info to him along with a request to get in touch. http://www.shutterbug.com/ In addition to making a very nice postcard, that photo would look great as a framed print.

Excellent idea, Susan. I'll give it a try. I'm just very interested in thanking the photographer for the interesting view of Afton Station and hoping he'll give me the opportunity to use it.

That is amazing :o)