. . . in a small Route 66 town. Almost Valentine's Day in Vinita, Oklahoma, but of course Route 66 wasn't Route 66 quite yet. It would take another 6 years for it to become official. Life went on, nevertheless, and some aspects of it were recorded in the Vinita Journal. Lacking much else to tell you today, I thought you might enjoy some of these articles.

"Tomorrow is St. Valentine's Day. The grade children are feeling very bad on account of this fact: no chance of having the regular Valentine box at school. However, Uncle Sam may come out somewhat ahead, as more postage stamps will be used. Where are the many comic Valentines that used to be sent and caused so much comment?" 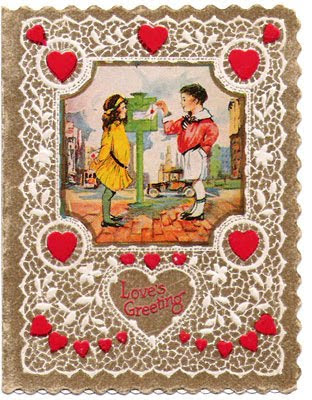 "The Emmons boys are boosters for the promotion of electrical appliances. The latest addition to their shop is an electrical driven machine for finishing and polishing all kinds of brass articles. In a few days they will put on a campaign for the sale of electric washing machines. A man will be here from the factory and free washing demonstrations will be put on in the homes. So, if you want to dodge a washing along about the first of March, just save it up and call the boys, especially if you have intentions of investing in an electric washer and wringer. Their shop is in the Gill-Coley Building, fronting on Canadian Avenue." 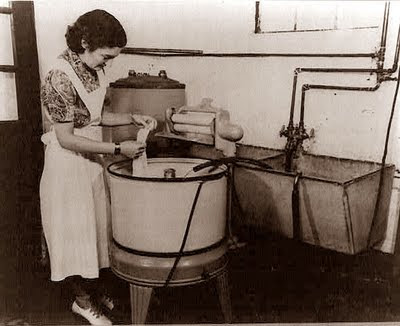 And finally, it wasn't the weather that year which was causing closings and prohibiting gatherings. It was a outbreak of smallpox and influenza. Even with all the closings, a few managed to celebrate Valentine's Day. . .

"Little Bertha Marie Ironside, small daughter of Mr. and Mrs. Robert P. Ironside, was fortunate to have a birthday on this St. Valentine's Day and so in spite of the ban on all gatherings, five little friends were invited to spend the afternoon at the home of her aunt, Mrs. James Davenport."
"Citizens are asked to respect the No Spitting on the Sidewalk" ordinance. Violators will be fined $5, or alternately will spend 5 days in jail, one for each $1 worth of fine."
Aww, they'll just spit on the floor of the jail!

Life goes on in a small town destined to become much larger and busier in just a few years, thanks to Route 66.
Posted by Laurel at 3:50 PM

Just love your stories. Are you on Twitter? I am Miss_Dazey there.

I can remember my Mom using one of those washing machines.

I've learned that one way you can tell you're getting old is you can see things that you used to own and use in antique museums.