I had expected to be snowed in again today, but by noon the sun was shining brightly and I couldn't resist taking a spin on the snow-packed roads to test out the Subaru in these conditions. I am impressed! It handles well and went over every bump, snow hill, and ice patch with absolute ease. Even so, I wasn't ready to challenge the roads up in Ottawa Co. in order to open Afton Station today. A call from David yesterday warned me against that, and I probably wouldn't have had any visitors anyway. There's much more snow accumulation up there than there is in Tulsa.

I gathered up Ron M. and off we went for about an hour of driving around, with stops at a couple of stores for supplies. I had planned to stay home all day and go through a big box of old family photos to see if I could find something interesting to put up here on the blog, but when I saw the potential of freewheeling through the snow, I bagged that idea. I decided that my family photos would bore my readers to death anyway, and of course they would have nothing whatsoever to do with Route 66 or Afton Station.
So when I got home from my winter ride, having shaken most of that housebound feeling out of my bones, I decided instead to post a few more of my precious real photo postcards. The first three are all from Oklahoma Route 66 and all four are among my most interesting cards.
This is one of my rarest cards. It's the Nehi man delivering Nehi soft drinks to the U.S. "66" Service Station in Quapaw, OK. Quapaw is up there near Picher, the last town before going into Kansas on Route 66. There is outstanding detail on this postcard which needs to be seen at closer range. 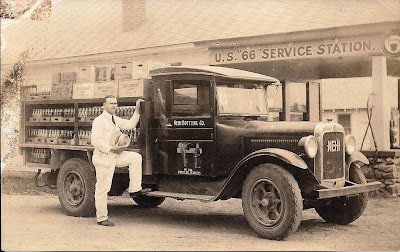 The 1/4 Horse Motel (a clever way to say Quarterhorse, I guess) was three miles west of Vinita, the next town over from Afton. "The Sweetest Rest This Side of Heaven", according to the back of the card. But my favorite is their front side exclamation: WE BED-THE-MAN PARK-THE-TRAILER AND BARN-THE-HORSE. Now that's what I call an all purpose lodging. 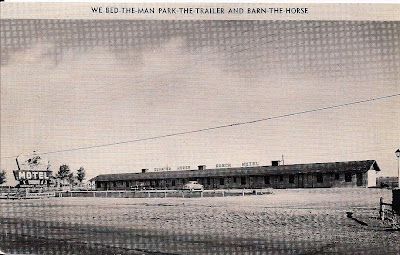 Much is said, justifiably, about the two WigWam Motels on Route 66, one in Holbrook, AZ and the other in Rialto, CA. But there was a sort of WigWam motel right in El Reno, OK too. The Motel Conway had a teepee on its roof! According to the back of the card, it also had ". . .tile floors, waxed and polished" and Indian curios. 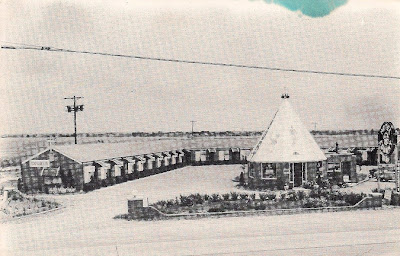 Finally, how about a cafe/service station shaped like a couple of icebergs in Albuquerque, NM. I suppose that on a super hot day in New Mexico, an iceberg would be appealing. The blurb on the back says "Fine Food, Good Coffee, and Hot Biscuits. Dancing -- Curios -- Truck Stop". Sounds like a pretty enchanting roadside stop in the Land of Enchantment. 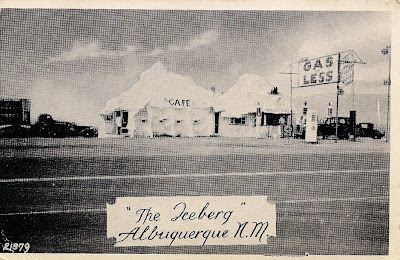 Amazing postcards, Laurel! Keep 'em coming. Hope to visit the station again this spring. Thanks for all you do.

Nowadays, postcards can be used as a tool for promoting one's products or services. The QuantumPostcards offers a wide selection of designs that will respond to your needs and budget.