A breath of fresh (mild) air 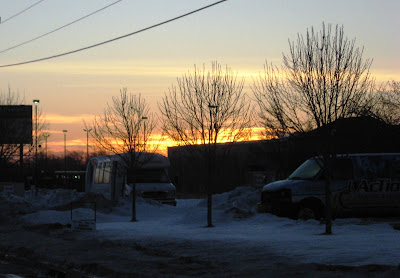 Taking a little car trip today was like being released from jail after a long stretch! The sun came out early and is melting the snow quickly. After breakfast, I fetched Ron M. and off we went. The goal destination was Afton. We didn't really expect to stay there, but just do a pass-by and make sure all was ok.
Our first stop was downtown Tulsa, at the corner of 2nd and Detroit to be exact, an old alignment of Route 66. There is a project afoot to paint 11 murals along Route 66 in the city, and Mural #1 has just been finished. Painted by Rick Sinnett of Murals by Palmer, it has a Native American theme. It is hoped that these works of art will act as another means of calling attention to Route 66 as it wends its way through the center of Tulsa. 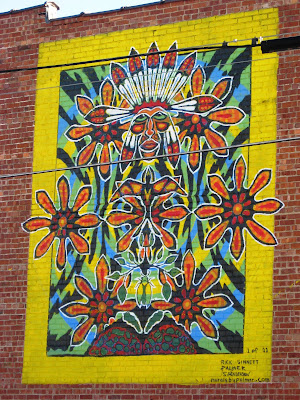 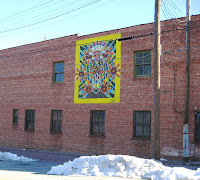 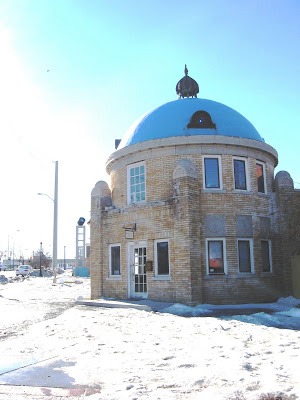 "Another masterpiece of Art Deco along Route 66 in Tulsa is the Blue Dome. The Blue Dome was built in 1924 and served as a Gulf Oil Station. This was the first station in Oklahoma to have hot water, pressurized air and a car wash. It was also open 24 hours, seven days a week. The station attendant lived upstairs in the dome itself. "-- BestofTulsa.com
On the way through Chelsea, we stopped at the Pryor Creek Bridge for a snapshot. I've taken several photos of the picturesque bridge in the past, but never in the starkness of winter snow. 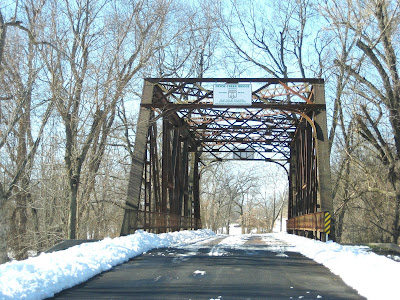 If we'd really wanted to, we could have revved up the Subaru and plowed through a bit of a snow mound in order to make it under the canopy once we got to Afton Station, but I chose not to. All I really wanted to see was that it was doing well, and once that was established, I really just wanted to continue on our little jaunt. I'll worry about Afton Station next weekend when, with luck, I will surely reopen on my winter schedule. But today, once I was assured that the good ol' Station was withstanding the elements, that was enough for me. So, off we went, but not before we stopped at Betty W's church, found her car in the parking lot, and left a note under her wiper telling her we were thinking about her and would see her soon. 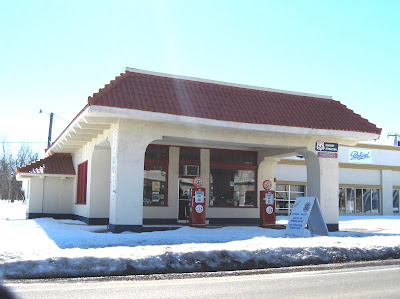 On the way back toward Tulsa, we drove to Pryor, a nice bustling little town not on Route 66, and Inola, another cute town with a restaurant we've been wanting to visit. It's a tiny little building right next to the railroad track, and according to the folks at the Discover Oklahoma TV show, the older lady who owns it makes some very fine food. It was closed today, but we'll be back. Eventually, we found ourselves back in Tulsa, but I for one felt very refreshed and delighted to watch the snow disappearing before my very eyes.

Glad to hear your escape attempt was successful and you and Ron were able to ramble along quite a few miles of countryside. Today's bright sun was handy for melting snow and giving you good lighting for your excellent photos.

Discover Oklahoma finds some wonderful places far off the beaten path (my path, anyway). Hope you and Ron get back to that place in Inola soon so you can tell us all about it.

Big warmup here, too! What a relief!

Hm, I haven't read about the Blue Dome. Something to add to my list!