A Day of Surprises

The first day back to Afton Station after a month of winter closures was one several surprises, but none so astounding as watching Ron "Tattoo Man" Jones eat fruit! Formerly, we were all pretty sure that he existed on a diet of nothing but Cheetos and Dr. Pepper, but today he walked in with a bowl of fruit! It may take me a while to recover from this shock. Naturally, he took a lot of flak for this, and he's still getting it. By the way, he also has a new tattoo of the burned Admiral Twin Drive-In on his leg. 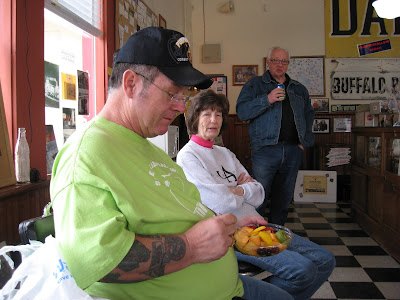 For most of the morning, we weren't sure how the day would go. All the "regulars" were there today -- Ron M., Marly, Betty W., Robin, Phil, David, Mike Pendleton, Patrick, and Tattoo -- so we were having a great time catching up, but actual travelers were few and far between during the morning hours.

But around noon, another big surprise! People started pouring in the door! And by the end of the day we greeted 18 visitors! They came from near and far, but mostly near, as to be expected in the off-season -- mostly people out for little day trips in the lovely, sunny springlike weather. But several folks were actually on longer Route 66 trips. They came from Cherokee KS, Manitoba Canada, Tulsa OK, Vinita OK, Stanton MI, Shawnee KS, and Humboldt, KS.

One of the couples from Vinita arrived in this beautifully restored hot rod. 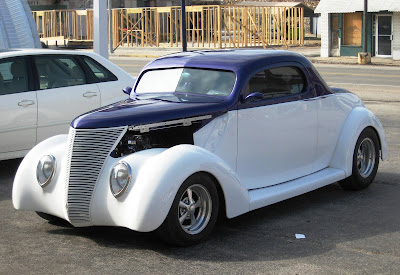 Marly spent most of the day back in the new showroom building. He's putting some finishing touches on the electrical work before the insulation people come in next week. David seems to think we can start moving cars in within a month. I'm still lobbying for some nice flat walls so I can hang the many posters and photos I've accumulated. I'll also need an area of shelves for accumulated memorabilia. There's still a lot to be done, but I can hope. 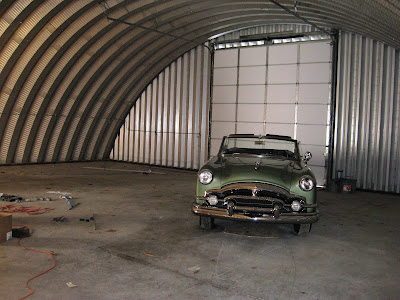 It was such a great day today. I'm psyched and ready to start a new season at the Station. I know it will be a great one. I'll be in Afton again tomorrow, so come on down! 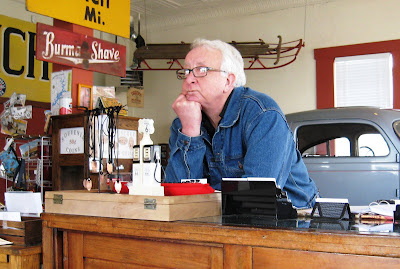 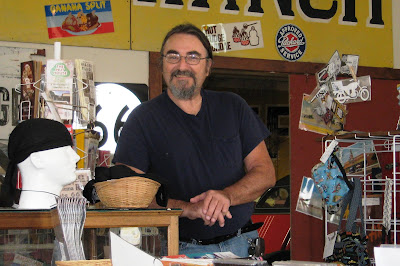 I'm not sure if I've ever posted a pic of volunteer Phil. Here he is!

I've been trying to eat more fruit and vegatables, too. Trying to go running more, too. Lim told me my jeans are shrinking. I said it's probably our laundry soap, but she has another theory.

I hope you can find some artist to decorate your new showrooms exterior.

New showroom is really coming along, it must be exciting.

Laurel..Me also on the fruit.. I had an Heart Attack a few weeks back...That will change ones eating habits.. Again great blog.. I have posted something about it on my blog.. Grumplins from Elberton... http://www.grumplinsfromelberton.com/ So be forewarned we may well be on our way...
Grump.. New Years may be a good time...

Trevor - The exterior is hopeless, but it's tucked behind the main building so you can't see it from any road....thank goodness!

Grump - The comment on your blog about MY blog made my day! I do hope you'll get on the road and come visit. Where is Elberton? Keep eating that fruit, and thanks for reading my blog!