A Visit From the Guru

When you're lost on Route 66, or perhaps you just want to be pointed toward an interesting site along the Route, or maybe you just need some inspiration, who you gonna' call?   Mc Jerry!

Mc Jerry is Jerry McClanahan, of course... the go-to guy when it comes to everything Route 66. He wrote the EZ66 Guide, the "bible" for Mother Road travelers, as well as the 8-state map series, and also had a hand in Sightings, the gorgeous coffee table book featuring some of his photos and much of  his writing.  He's also an incredibly fine artist who devotes his talents toward 66 almost exclusively.  Here he is in the foreground, with Betty and Ron M. in the background. 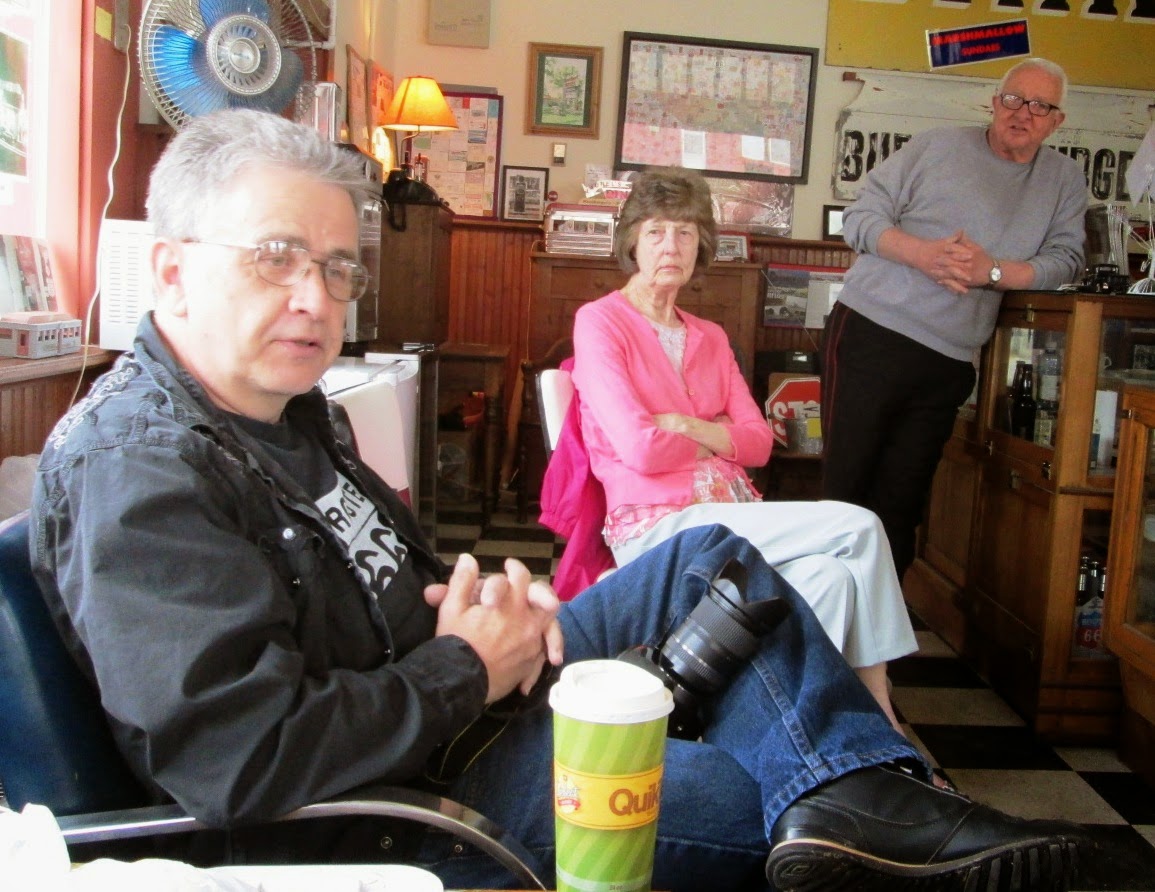 Jerry's unexpected visit to Afton Station today was a pleasant surprise.  He had been doing a photo shoot at a drag strip in the area and stopped by, as  he often does, to say hello.  How lucky for this foursome from Norfolk, United Kingdom, who had been following his book all along their Route 66 pathway.  They were delighted to meet him and get his autograph. 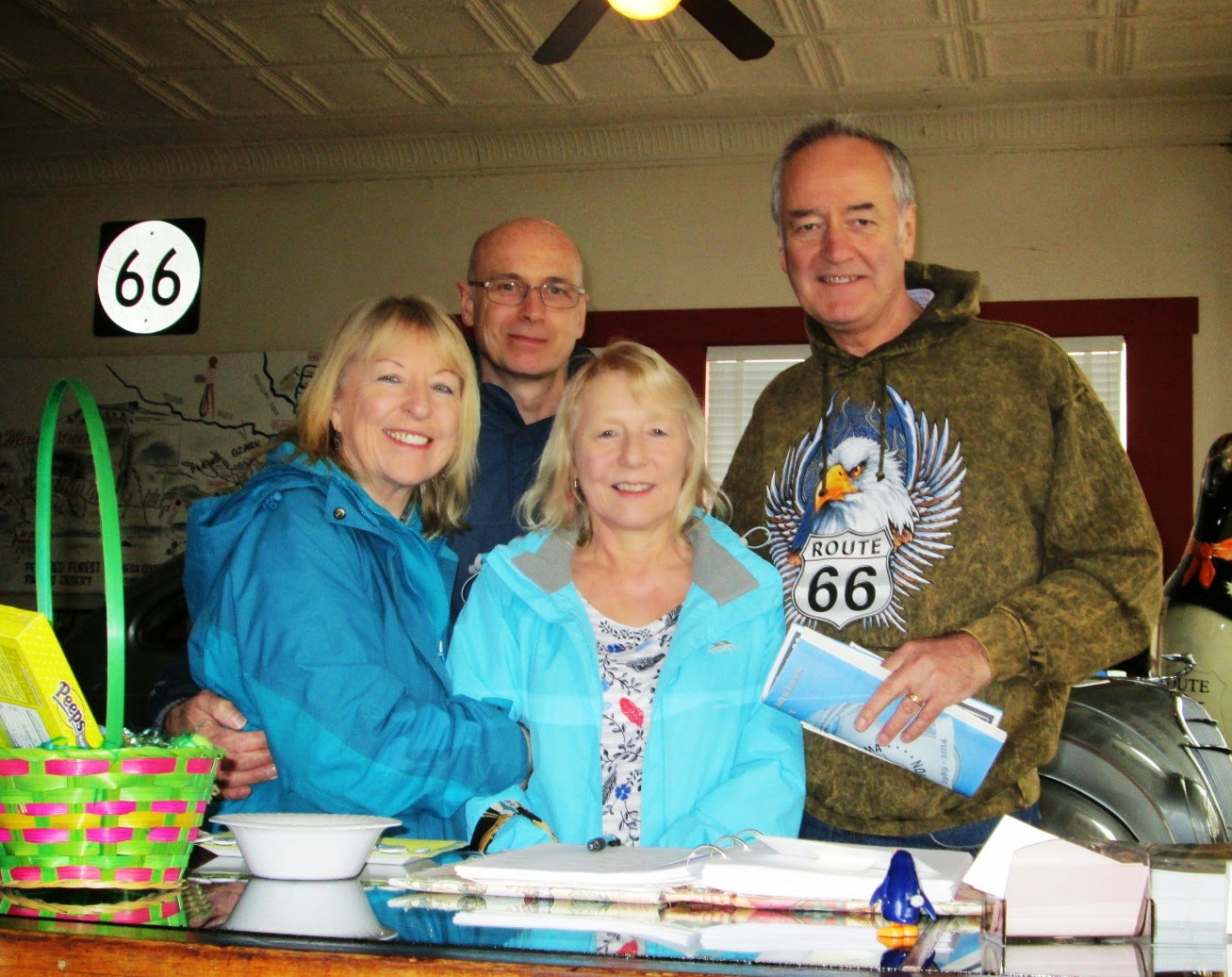 Most of our Easter day was quite slow otherwise.  It rained a lot in the morning, then stayed chilly and dark all day, far from perfect day to parade one's Easter finery.  Our only other visitors today hailed from Dayton, Ohio and Helsinki, Finland.  The Finnish folks were heading for California on our favorite road, of course. 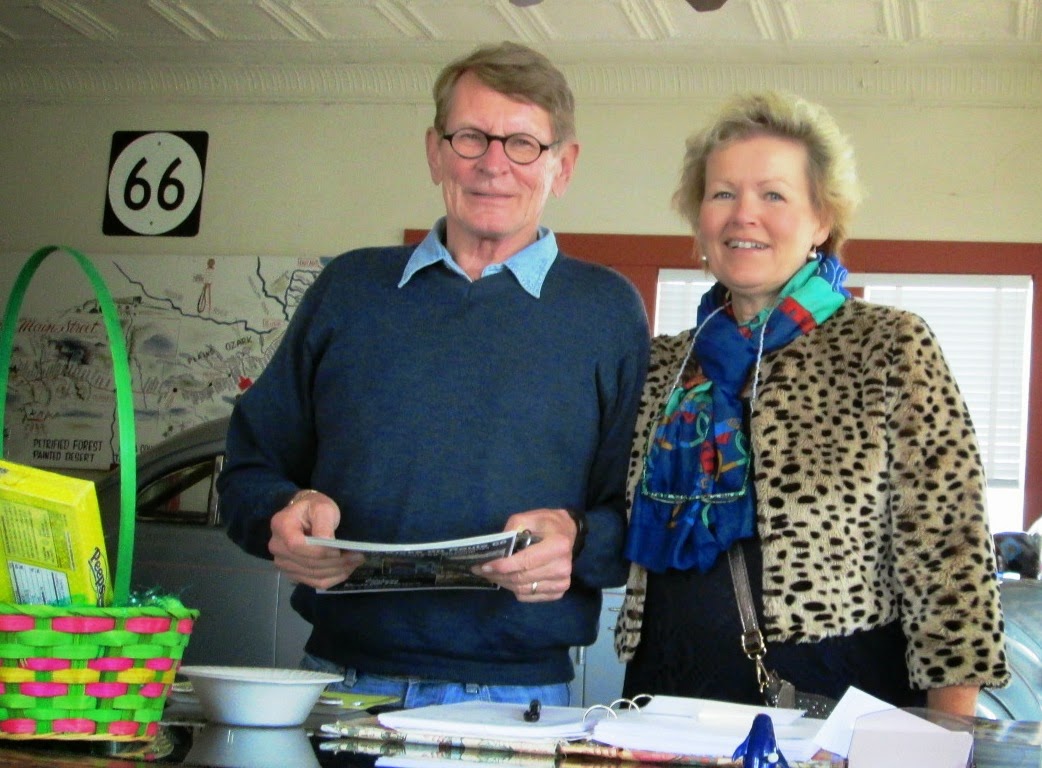 Little Afton is still getting publicity for Thursday's tornado, which did not cause widespread damage, although did target one area just on the edge of town.  This little article appeared in a local paper.


AFTON  -- Oklahoma residents are nothing if not resilient. Some tornado survivorsnear Afton didn't let an EF-1 tornado stop them from going to prom.Daley Wheatley rode out the storm in her home near Afton. Her date - NSU freshman Brady Brandt - and friends Rachel Ritchie and Rowdy Rice took some prom pics in front of the Wheatley's shop the next night.The shop suffered damage in the storm, but no one was injured. So the group posed in their prom best, using their storm-tossed property as a backdrop.People in Delaware and Ottawa counties scrambled to find shelter, and thankfully, no one was injured.4/3/2015 Related Story: National Weather Service Confirms Tornado In Ottawa CountyDaley's brother Dillon ran from the shop when he heard the tornado coming. The family found pieces of their livestock trailer thrown in another field.The National Weather Service confirmed the tornado that caused damage in Green Country Thursday night was an EF-1. It shredded barns and trees near Afton. The storm path started about two miles southwest of Afton and got stronger as it moved, eventually forming a tornado.