It was once again a wild and wooley day at Afton Station, with most traffic happening in the early  morning and near closing time.   There were 29 visitors, and for the most part I was handling the crowds alone, although Tattoo Man and Betty stopped by in the middle of the day.

Tattoo wanted me to post a photo of his brand new tattoo of the neon sign at the Crestwood Bowl in Crestwood, MO.  It seems like it would hurt be be tattooed on the neck, but he said it was just fine.  I can't remember what number it is, but it's now well over 100. 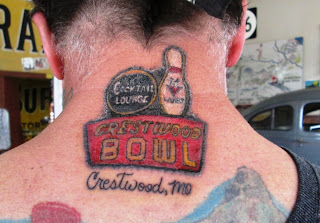 I was just getting to know some new friends, Steve and Cathy from the SACS66 Antiques and Collectibles shop up in Baxter Springs, KS when an old friend, Jerry McClanahan surprised me with his visit.  He was on  his way up to Joliet, IL to attend a festival.   Steve and Cathy haven't had their shop for very long, but I've heard good things about it from those who have visited.  When in Baxter, be sure to stop by.  Jerry (McJerry) is known by just about everyone.  He's a marvelous Route 66 artist and probably one of the most knowledgeable experts on Route 66 (if not THE most knowledgeable), having written the acclaimed EZ66 Guide to Route 66, considered the "bible" for all who are attempting a Mother Road trip.   It's always great to see my old friend Jerry! 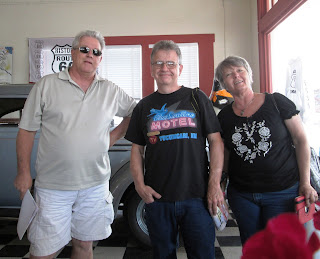 McJerry in the middle, Steve and Cathy are the bookends

Around the same time as all that activity, a teacher from Krebs, OK came to do some research prior to teaching a unit on Route 66 to her 4th Graders.   We made a few suggestions based on what we know other teachers to have done under the same circumstances.  Love to have  kids learn about Route 66 while they're still young!

This couple from Vancouver Island, Canada also stopped in.  He's a collector of vintage British cars, including a '57 Morris Minor, a '64 Land Rover, and a '79 Triumph TR7. 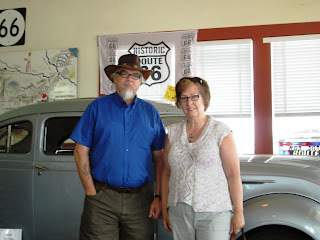 Four friends who always travel together, from San Diego, CA and Cambria, CA are doing a Route 66 trip.  We had a nice chat and the lady on the right, Pam Chapman, interviewed me for her Focused Feeling blog (pamchapman.com)  Very nice folks, also with an interest in our old cars. 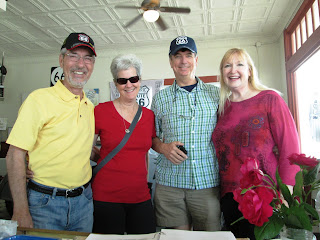 Other visitors included a young couple from Hamburg, Germany on a motorbike.  They had been through a bit of rain this morning, but continued on undaunted.  There was also the sister-in-law of one of my dialysis friends, a geocacher from Lexington, KY, and other fine folks from Seattle WA, Brazelton GA, Raleigh NC, Rochester IN, and Langley OK.

I don't comment all that often but I just wanted to let you know how much I enjoy reading your posts and seeing the pictures of all the folks who visit Afton Station.

Thanks, Mike! I'm so glad to have you as a reader. You're so knowledgeable about Route 66. See you in Joplin!

Wow! What a great post.I just found this blog. I'll definitely be back. Blue Nude