The sun rises on a new, hopeful day in the State of Oklahoma. 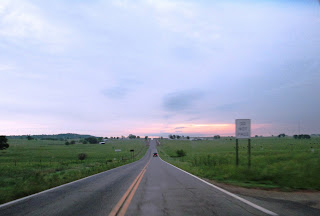 As everyone knows by now, yesterday was quite a day for our state.   So sad, all those lost lives and lost homes in Moore, an Oklahoma City suburb, not far from Route 66.  The news has not only dominated the press and the media, but has also occupied the  hearts and minds of all who live in beautiful Oklahoma.  We have tornadoes.  This cannot be ignored or denied.   Sadly, it is a part of life here, a part I'm not sure I'll ever get used to.  But it happens, and I'm sure those Moore citizens are already thinking about rebuilding their lives.  I've learned that Okies are like that.  Furthermore, people from all over the state are rushing to help, because  that's what Okies do.  Our congressional legislators are a weak link in this rush to be of help to the unfortunate citizens, but hopefully they will finally understand the importance of putting human lives above politics.

Meanwhile, it was pretty quiet on this mostly dark and gloomy day in Afton.  We had 11 visitors, then I left about an hour early because weather reports relayed to me via text message from Ron M., who was at home watching news reports, indicated that there could be more storms coming our way.  I drove home in rather hard rain, but fortunately there was little wind and no hail whatsoever.  I'm home now and things are calming down nicely. 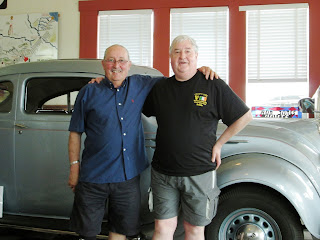 These two gentlemen are from Inverness and Glasgow, Scotland.  They're cruising Route 66, and I'm such a fan of the Scottish brogue that I would have liked them to stay at Afton Station forever, just talking to me.  Love these guys! 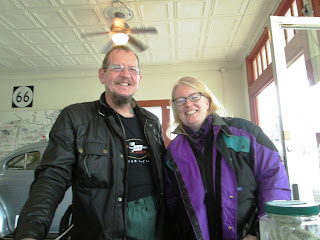 The British Isles were also represented today by this couple from Sheffield, England.  They plan to traverse all of Route 66 on their Harleys, and so far seem undaunted by the weather.  I hope they escape the worst and have many sunny days ahead.

We also had visitors from Versailles, Illinois (truckers who have been past Afton Station before but just today finally had time to come in), a family from Branson, Missouri and a couple from Grove, Oklahoma.   Marly was with me for several hours and Betty stopped in shortly before we decided to have our early closing.

Thank God, our home is safe. We just had hail, but it didn't hurt anything. I have two former co-workers who live in Moore about whom I haven't heard. One of them has a wife who's a special-ed teacher at an elementary school there. That sure worries me.

I'm so glad to know that you and your family are ok! I hope you find out good news about your Moore friends. I have a feeling that no news is good news in this case, but I guess you never know.