When your ship is sinking and you shout "Mayday", you are actually shouting "M'aidez", which is French for "Help me!". This has absolutely nothing to do with anything other than that today is May Day and I apparently have too much time on my hands. Instead of dancing around the May Pole or delivering flowers to the doorknobs of my friends as is the custom, I'm sitting in a frigid, rainy Afton awaiting guests to come and cure my boredom.

I did have some visitors this morning, eight to be exact. They were from Sand Springs and Fairland, OK and a couple from Digbigh, Ontario, Canada. Since they left, I've swatted flies, (Kill Count: 18 down, 1,000 to go), wrapped up the April bookkeeping, chased away an unwelcome local visitor, played my Indian flute a bit, and enjoyed several chapters of the Pete Seeger biography I'm reading. I really wish some more travelers would come by, but I don't blame them for not wanting to get out in this cold rainy day. A few motorcycles have gone past, and their riders looked miserable. It's 43 degrees right now, which is over 30 degrees lower than yesterday.

Tattoo Man had his picture put on some bottles of Jones Soda. He brought me one yesterday. 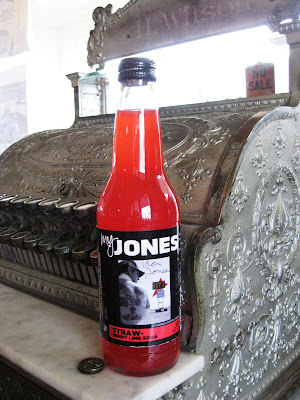 My visitor total for April was considerably higher than last April's, and yet my sales total was way down. I guess the economy is finally taking its toll. That's ok, as long as people keep traveling. That's what I'm here for.

At the very end of the day, three of the coolest guys came in. They introduced themselves as three doctors -- a pediatrician, a proctologist, and a gynecologist -- but later confessed that they were pulling my leg. Only one was a doctor, the pediatrician, from Tulsa. The other two were boat dealers from Longmont, CO! They had me fooled for quite a while, but at least I didn't try asking them for medical advice! Anyway, they were a bright spot in my otherwise boring day on Route 66. They loved the cars and especially the Packard Motorcoach, which is already gathering raves from visitors.

Glad you had some enjoyable company on a rainy Sunday. I imagine a good book comes in handy on a slow day. And Pete Seeger, there's a life worthy of a good telling. I want you to know about my brush with greatness (as David Letterman used to call such encounters) that involved Pete Seeger. I've had the good fortune to shake his hand--twice. I used to teach with the wife of Guy Logsdon, music historian and biographer of the Oklahoma legend (and Pete Seeger's pal) Woody Guthrie. The Logsdons had a party at their house following a lecture and performance by Pete at the University of Tulsa (where Guy was head librarian that Guy had arranged). My husband andI were invited to the party where we got to visit with Pete and his wife. That was 35 years ago and thinking about it now I realize that Pete was about the age then that I am now. Wow, that flips me out nearly as much as the fact that I looked that incredible man in the eye and shook his hand. Please, forgive my getting off topic, Laurel.

Uh-oh! Closed that parenthesis in the wrong place. You were an English teacher. Go ahead, use our red pen. It should have been ". . . (where Guy was head librarian) that Guy had arranged." which would have then made that sentence make sense.

Susan,
I would have loved to meet Pete Seeger as you did. I've been interested in him for a very long time. But the reason I'm reading this particular biography is that its author, David Dunaway, will be coming to Tulsa in a few weeks to interview me for a forthcoming book on Route 66. I decided I needed to brush up in my Seeger knowledge so I could ask him some intelligent questions. The book is fabulous, by the way.

You really need not apologize for misplaced parentheses and the like! I hate to think of all the errors you find in my writing, since 95% of the time I'm writing in GREAT haste, after a long day at Afton Station. Proofreading rarey occurs. :-)

Speaking of Route 66 seminars, I'm going to the preservation workshop in Chandler on May 14th. Are you speaking there?

No, I have been invited as a participant, but certainly not as a speaker. I presume there will be some interesting topics discussed, but I can't be there because I can't do anything on weekends during the travel season at Afton Station. I don't like to be away on busy weekends, and since I'll be away (unavoidably) for a week at the end of May, I need to defend my territory for the rest of the month. I look forward to hearing what's discussed at the seminar.

I'd been looking for Ron Jones bottle. I haven't found it yet, but I'll keep looking.