No, that's not me talking! That's a direct quote from one of my guests today. I mean, Packards are great, but really? :-)

It was a cheery day at Afton Station on beautiful Route 66 today. Ron M. and I met and greeted 21 visitors. Most were somewhat local, but we also had visitors from Granbury TX, Seattle WA, and Lenoir City TN. The locals were from the following Oklahoma towns: Tulsa, Jay, Grove, Pryor, Afton, and Big Cabin. 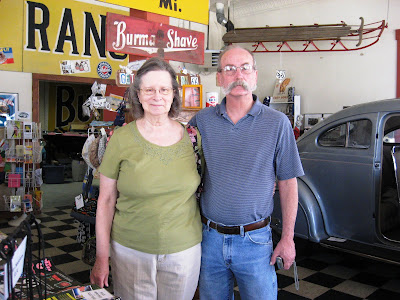 Repeat visitors, Michael and Judy Wheat from Pryor, OK stopped by to check out the new showroom and Packard motorcoach. It's always nice to have a visit from them. Michael collects antique radios, but he's very enthusiastic about old cars, too. 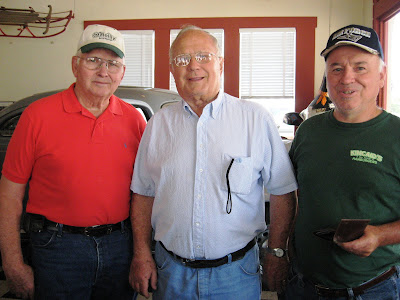 Here are three brothers-in-law, two from OK and the one on the right from Granbury, TX. The Texan carries with him in his wallet a small business card that he found among his mother's things after she died. It's from the Indian Trails Trading Post, on Route 66 in Lupton, Arizona and she saved it from the 1950s. His mother was a fan of Route 66 and so is he. I tried to photograph the colorful but well-used business card, but my camera was being stubborn about shooting closeups today.

Cynthia, a repeat visitor from Tennessee, was here to buy one of the old Packards from David. The last time she was here, she fell in love with one of the Packards that had not been restored and which we hadn't necessarily intended to include in our collection. Today, she came to town to close the deal. Another young man was also looking to buy an old Packard, but we've now run out of any to sell!

It was a varied day, and that's always fun. Add a heap of perfect weather and it couldn't have been better!

You don't have anymore to sell. Well, I'm still waiting for you to hand out free samples.
I know you're answer already.

Trevor,
When we have some freebies, you'll be the first to know. By the way, does it have to include an engine and a body? LOL!