They changed the Hours of Operation sign on the Shaved Ice place to "3 to 7 p.m."What the....? Nobody was around to ask today, but I'm hoping those hours are just temporary until school is out for the summer, since high school kids are going to be working it. If not, then what good will it do for us, since we close at 3? We pay for their electricity and water, so these shortened hours just aren't going to work for us. More on this another day. Meanwhile, they put up a string of flags for their Grand Opening yesterday. So glad they're there, and I feel sure the hours thing will straighten itself out! 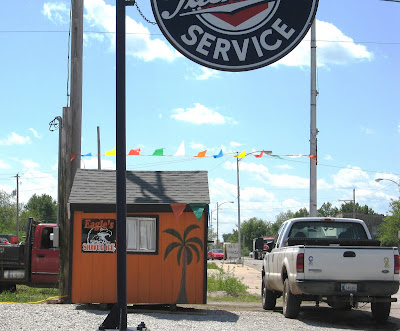 By noon, which is when I'm writing this, I've had exactly NO visitors. Robin will be working here this afternoon since I have to leave early to pick up Ron M. from the airport. He's been on a two-week tropical vacation. He chose a perfect time to go. Here, it's still cold -- in the low 40s this morning, but up to 70 by the time he steps off the plane.

All the flies except one seem to have expired since Sunday. The one remaining critter is driving me crazy, but I have to admire the little guy's spunk and agility when I go after him with the fly swatter. Maybe he deserves to live.

I'm home now. I had four gentlemen from France come in just as I was turning over the baton to Robin. They spoke zero English, but we were doing ok with my minimal French. Earlier, I'd had one other visitor from Tulsa, OK. That makes only 5 visitors today, unless Robin had a few more after I left.

I took the interstate back to Tulsa in order to get to the airport on time. I rarely post photos of the "Evil I", but it was such a lovely day with nice cloud formations and no traffic. . . 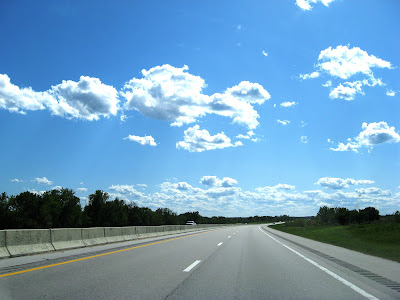 How cool is this? Visitor from the fall of 2008, filmmaker Eyal from Israel, sent me this photo of their car driving in Tel Aviv. Please note the Afton Packard sticker in the window! Nice international publicity! 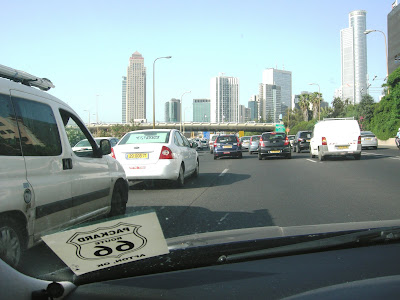 Things will be picking up soon, no doubt!