The sun was out for much of the day, Tattoo Man is back from his trip to Springfield, IL, and we had a pretty good day at Afton Station. Actually, it was kind of slow, but quality is usually better than quantity, and that's how it was today. The first of our five (yes, a mere five) guests consisted of a solo traveler from Indianapolis, IN who won my heart by being a fellow postcard collector. He's headed for Albuquerque to visit his mother and he spent some time checking out the postcards I have for sale at the Station.

A father and his extremely adorable little almost-three-year-old daughter from Langley, OK stopped in, and little Gracie got a big kick out of the pressed penny machine, although she could barely crank the handle and needed a bit of help from dad. 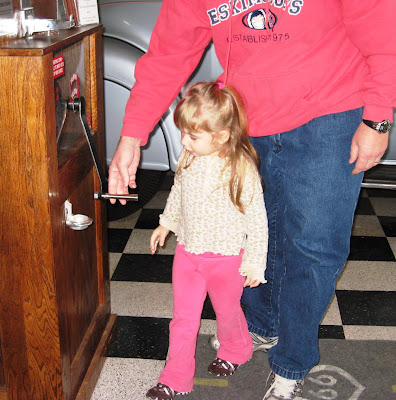 A deaf couple from Paola, KS were our final guests. As with my foreign visitors, communciation was difficult. However sometimes a picture says a thousand words, and when the gentleman pulled out his iPhone to show me pics of his two beautiful restorations, a 1930 Ford and a 1932 Chevy, the "language barrier" was broken. Even so, I wish I knew American Sign Language!

All day, trucks full of live turkeys going to market kept racing past Afton Station on Route 66. We're not many miles down the road from the poultry processing area of Northwest Arkansas, so I guess the little guys were heading for their demise in preparation for the Thanksgiving rush. 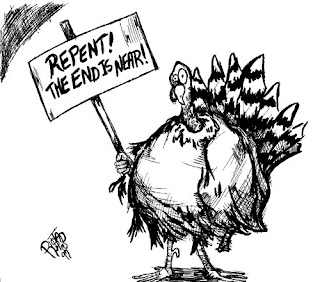 Tattoo Man was back from a few days in Springfield, IL where he went to visit our mutual friend and Route 66 icon Bob Waldmire. Besides seeing Bob, he reported that he had a couple of wonderful breakfasts at the Cozy Dog, which is owned by Bob's family. Cozy Dog Drive In

We'll be having a big Mustang group from Missouri stop by on Saturday, so I'll be sure to snap some pictures of the cars. They plan to take a group photo in front of the Station, so photo ops should be plentiful.
Posted by Laurel at 5:24 PM

Looking forward to the Stang Pics.

OMG! I've followed your blog since mid-summer and love it. I was reading the news from Springfield - a friend of mine lives there - and was shocked to find TATTOO GUY mentioned in a similar article!!

Tim - thanks for visiting my blog. Yes, Tattoo went to Springfield to visit our mutual friend Bob Waldmire, who is the victim of terminal cancer.