WAY too spooky for my taste!

This has been one HELLISH Halloween so far, and it’s only 9:20 in the morning. I just arrived at Afton Station, but bear with me while I first tell you what’s happened to me already today. It began at 1:10 a.m. when I was awakened from a sound sleep by someone pounding and kicking at my back door, which happens to be about 10 ft. from my bedroom. This wasn’t a neighborly knock, believe me. The person, whom I could not identify as being male or female because of his Exorcist-type voice, was cursing and howling at the top of his lungs as he smashed repeatedly against the door. Terrified out of my wits, I crept to the front of the house to call 911 and prevent the person from hearing me do so. I was shaking so hard I could barely talk, but managed to tell the police my address. Suddenly, the pounding and kicking and cussing began at the front door, which is very close to he room from which I was making the call. The police officer kept me on the line and assured me that he’d sent three squad cars, which should be there in less than 5 minutes. He also asked me very unsettling questions such as whether I had a weapon to protect myself if required. After about a hundred years (actually, just the aforementioned 5 minutes) the squad cars arrived and I heard a big ruckus on my porch. Finally I heard the voice of the officer telling me they “got him”. I opened the door a crack to confirm, and there were three policemen holding a guy (wearing a really bizarre blond wig) whom they’d already cuffed. They asked if I knew him, which I didn’t. They said they were hauling him off to jail. Good! Clearly he was extremely drunk and maybe wandered up to the wrong house. I guess I’ll never know. I just know that I was totally freaked out, and it took me forever to get back to sleep.

I rarely dream, or at least I never remember my dreams, but after that incident I finally fell back to sleep then woke with a start around 3 a.m. I had dreamed that the police decided not to take the guy to jail, but instead to rent a dumpster, put it on my front lawn, and let him sleep it off there until morning. (comic relief)

And just to add a bit of Stephen King to this tale, this morning when I left the house, I found that one brick had been pried up from my brick patio and it was lying next to the back door. I suspect that if the police hadn’t interceded when they did, that brick would have eventually gone through my window.

Enough? Hell, no. There’s more. (I know this has nothing to do with Route 66, but I’ve got to tell somebody about my horrendous morning. ) I do my grocery shopping on Sat. mornings around 5 a.m. (Don’t ask…it’s just a habit. I hate crowds). So off I went, did my shopping without incident, and as I was ready to leave the market (in the pitch dark, of course), the store guard approached me and told me he was going to escort me to my car because a thief “in a gray hoodie and jeans” had just left the store and they thought he was hiding somewhere in the parking lot. Good grief! By this time, I just wanted to go home, get back in bed, and pull the covers over my head!

But wait….it's not over yet! On the way home with my groceries, the moon was full and about as big as I’ve ever seen it. It was such a beautiful sight that I decided to pull over and snap a picture. I pulled into a parking lot and put down the window just as I saw a dark SUV careening in my direction. I honestly thought he was going to t-bone my car, but he jammed on the brakes just in time, rolled down his window, and screamed (and I do mean screamed) “Where’s the library, Bitch?!!” I was pretty darn jumpy by this time, but had the presence of mind to know that there were no libraries open at 6 a.m. and also that I just wanted out of there. I floored it, and he floored it too, only in reverse. I drove the five or six blocks home at breakneck speed and lost the guy before I pulled into my driveway. Good heavens, save me from another morning like this!
______________________

I’m at Afton Station now and absolutely nothing has happened so far. I like it that way! I put out basket of candy for any little ghouls or witches who may come by, and that’s it for me as far as Halloween goes this year. It’s normally my favorite holiday, but tonight I plan to turn out the lights and be a grinch to the 100 to 200 kids that usually come to my door. I’d be doing it alone this year since Ron M., who usually helps out is away, so just this once I hope the little ones will understand if I lock up and hide. It's just too much for just one already frazzled person.
_______________

It’s 1:30 p.m. now, and the time has flown by. Betty spent the morning with me, and David (and son Patrick) came to help with the Mustang group. The group arrived over an hour late, having been held up on a Coleman Theater tour in Miami, so they could only stay here for about a half hour. It actually turned out to be two clubs, the SW Missouri ‘Stang Gang and the Route 66 Corvette Cruisers, both out of Joplin, MO. Most of the Mustangs were late models and they parked too strung out for good pics, but here’s the best I could do.

There were 21 cars, and some of the 45 members were dressed for Halloween. Nice group. 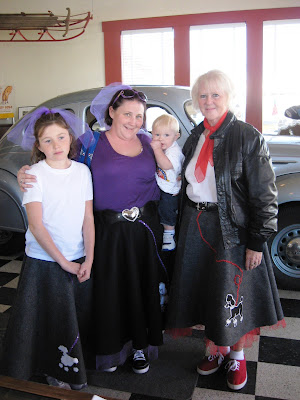 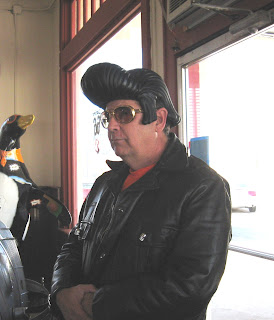 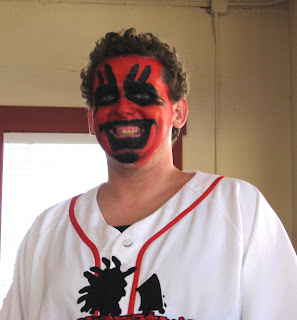 A touch too much makeup?

There were also 16 other visitors today. One was Gary Kroll, a former pitcher for the Mets, Phillies, Astros, and Indians. He pitched from 1959 to 1971 and thus got to throw against some of the greats such as Mickey Mantle and Hank Aaron. Nice guy. BIG guy. Here he is today, 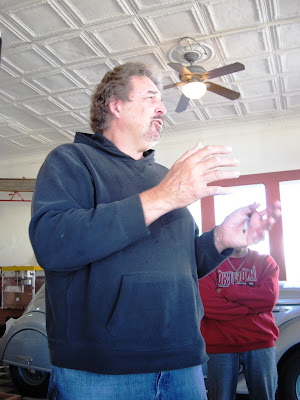 and here he is when he was with the Mets. 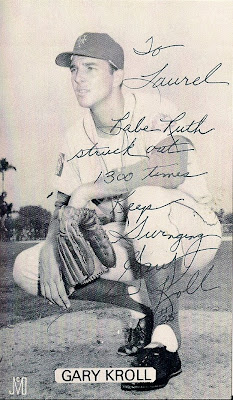 Other travelers came from Tulsa OK, Pittsburgh PA, Overland Park KS, Denver CO, Grove OK, Clear Spring GA, and Arlington, TX. The day ended WAY better than it started. We've had almost twice as many visitors this October as in October of '08. Yes! More tomorrow.
Posted by Laurel at 4:40 PM

Goodness gracious, what a horrible morning. I am glad you are OK. You certainly deserve to chill tonight.

Don't ever say you don't have anything to write about... My goodness! I'm so glad you are safe.

don't blame you for locking up and hiding from the kidlets !!!

Wow!! Scary stuff!!! Hope your Halloween adventures are over.

It is rather encouraging, however, that some Tulsans seem quite enthusiastic about reading. Maybe the libraries could consider opening a bit earlier.