I just dragged my sorry, wet butt home from Afton. I took the interstate because of the danger of flooding on old Route 66 and other secondary roads. The interstate was no picnic, either. Basic deluge. This is supposed to go on for another 18 hours, but now that I'm home I feel much better, so here's what I wrote earlier while at the Station.
_____________
You're probably tired of hearing about dreary days at Afton Station but Holy Smokes (!), this one takes the prize for gloom. I just arrived and it's raining, and even though it's 9 a.m. it's so dark that it might as well be night. Since it's supposed to last until tomorrow, I don't expect to see any rainbows today, nor do I expect to see a whole lot of travelers. Perhaps I'll be pleasantly surprised, but I'm not holding my breath. With luck, a few intrepid souls will show up. We'll see.
When I first opened Afton Station 9 years ago, I had virtually no visitors that first year. There had not yet been any publicity or advertising, and I didn't even have much on the outside of the Station to indicate it was open. On those long, lonely days I started to count trucks driving past. I had a little chart on which I'd record which direction they were driving, their trucking company, and their point of origin if it was visible. This exercise was time-wasting, mesmerizing, and a little bit educational. I learned that an average of 75 18-wheelers pass in a normal hour, most of them going east to west. If the truth be told, that's about all I learned. :-) I watched trucks in the rain for a little while this morning, but my heart wasn't in it. 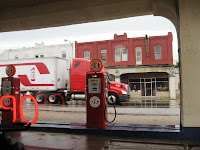 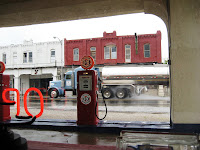 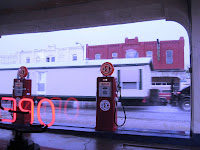 _____________
Well, well. People actually showed up today! They started coming in around noon, and by the time the day was over, I'd visited with 13 guests. Most were pretty wet and soggy. David's brother from Louisville, KY is here because they're going on a fishing trip this weekend, and since he was my brother-in-law for 35 years, I was eager to see him. He and David stopped in for about an hour and it was SO nice to get to see John again. 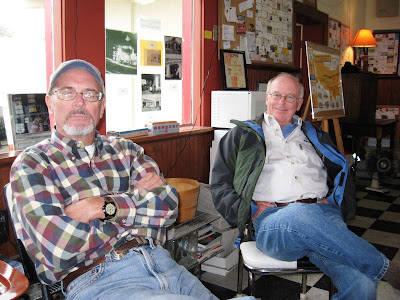 Later, I had guests from Bartlesville, Monkey Island, and Catoosa OK, Missouri City TX, Springfield TN, and Conway AR. It turned out to be a fine day after all, despite the weather.

Tomorrow a tour group is arriving in the morning and since I can't be at the Station, I've given the job of tour guide to Tattoo Man and Betty. I'm leaving things in good hands!
Posted by Laurel at 5:37 PM

Glad that some folks showed up. Going all that way for nothing would be disappointing.

Wow, I didn't know they had monsoons in Oklahoma! ;)

Glad to hear you had some folks stop by despite the gloomy weather!

I took I-35 home from work yesterday. A horrific wreck had traffic backed up for a few miles.

But, in a couple of months, it's liable to start getting more lonely for you.