I can't honestly say it wasn't a very scintillating day at Afton Station today. In truth, most of the day was kind of boring. As usual, things perked up toward the end of the day when people started coming in, but for most of the morning Ron M. and I killed time by sorting through more of those old travel brochures, getting ready to send them to Mike W., who was the first to request them.

When there's not much to do at the Station, looking out the window and observing life (or lack of it) ends up being the major activity. Of interest to us today was the fact that, after years of never seeing a dog on a leash in Afton, today we saw FOUR of them being walked down the road on leashes! Could it be a coincidence, or did Afton finally pass a leash law? (Which would be an excellent idea, as dodging free-roaming dogs is healthy neither for drivers or for the dogs themselves). We were so curious that Ron walked around town a bit trying to see what was going on, but found nothing. It's rare to see citizens walking the streets of Afton in any case, but walking dogs on leashes is extremely curious.
We only had 9 visitors today. The Distance Award was won by a couple from Calgary, Alberta Canada traveling most of Route 66. Coming in second was a couple from Cayucos, CA who also plan to drive as much of the Mother Road as possible. Back in California, they own a motel on Morro Bay. Must be nice! Visitors from nearby included those from Cleveland, Ponca City, and Miami OK. The couple from Ponca City was accompanied in their travel trailer by -- you guessed it -- a dog on a leash! Here's Roxy, a beautiful canine specimen. He is extremely camera shy, so this was taken on the run. 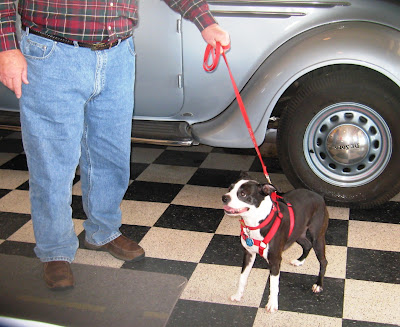 In one of the travel brochures we found today, there was a pamphlet of questions from the old World Book Encyclopedia designed to keep kids busy while traveling. The questions were remarkably difficult, and that surprised us. For instance: With as much weight as they carry, why don't an elephants' feet get stuck in the mud? First person with the correct answer will get an Afton Station magnet from me. Good luck! (Actually, the answer sounds a little fishy to me, but what Baby Boomer would ever question the World Book?)
Posted by Laurel at 5:24 PM

My only guess is that the circular nature of their legs allows them to pull out of mud smoothly (even pressure everywhere).

Their soft feet act as a cushion and when they stand in mud their feet expand like a tire when the air has gone. A flat tire! This makes it very easy for them to lift their feet.