I wasn't sure I'd have time to blog this weekend, and in truth I don't have a lot, but I'm too much of a communication junkie not to take my few free moments to report on the day at Afton Station. Besides, Sarah and Matt are staying with David tonight, so I have a little more expendible time than I originally anticipated.

It's so good to have daughter Sarah and son-in-law Matt visiting from Chicago for a few days, although I don't think they were real happy with me this morning when I dragged them out of bed at 6:30 for the drive to Afton. We stopped for a quick breakfast at Sonic and made it to the Station just about 5 minutes late. Last night we went out for a wonderful steak-and-lobster dinner at the Silver Flame, my treat, so I told them they could just stop bitching about the early morning hour today. They didn't. :-) 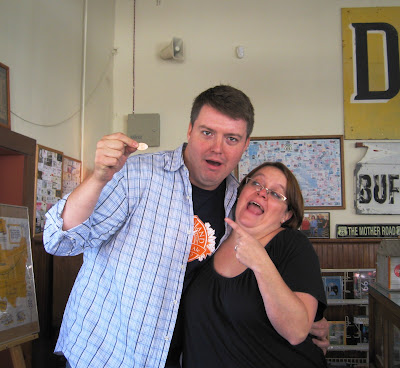 I am joking, of course. I love having them here. Unfortunately, we had no visitors for the first hour at Afton Station, meaning they had even more fodder for giving me a hard time about getting them out of bed too early. C'est la vie! Matt enjoyed some time with the pressed penny machine and dusted off all the cars in the showroom, and I showed Sarah some of the recent videos which have been made of the Station. 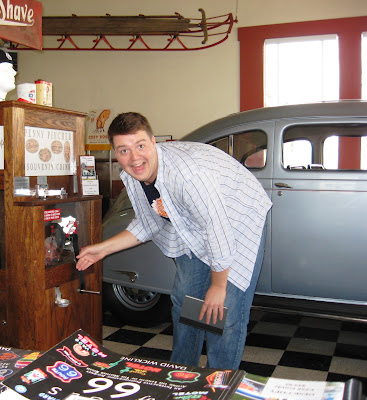 David picked them up at around 11:30 a.m. and they all went off to a corn maze. Of course, the moment they walked out the door, the visitors began to arrive, and interesting ones at that! They came from Norman OK, Wagoner OK, Olympia WA, Cordoba Spain, and Weisbaden Germany.

But the definite stars of the guestbook today were a husband and wife who, by the most unbelievable of coincidences, reside in the tiny town of Bethlehem (and I do mean tiny... once named the smallest town in Connecticut), where we had our weekend house for 15 years. It went like this: I asked them where they were from, and they said "Just a little town in CT you've never heard of". I asked the name of the town, and when they said "Bethlehem", I replied "Oh, do you live on Long Meadow Pond?" I thought those poor folks were going to collapse right there on the floor! After some comparing notes, it turns out we know several people in common, which I guess shouldn't be surprising in a town with hardly any residents. What fun to encounter these folks, Dave and Jan, right here in little old Afton. Furthermore, they have ideas similar to ours when we decided to abandon the East Coast and look for a place on Route 66. I hope it happens for them. 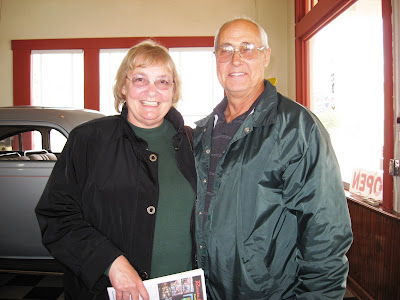 I left a little early and had an uneventful (and fast!) trip home. Back to Afton tomorrow.
Posted by Laurel at 4:31 PM

Sounds like a great dinner and tasty breakfast. Hope you have a nice Saturday evening.

Glad you're having such a nice time with Sarah and Matt! (He looks like quite the card, by the way!)

How amazing that you encountered people from the same tiny town where you had a place. It really IS a small world, isn't it?