Alternating drenching downpours and bright sunshine made for an interesting day at Afton Station. It was definitely rainbow weather, and I actually saw one late in the afternoon. But rainbows weren't the only interesting aspects of the day. There were also the dogs and the Airstreams.. Two spectacular dogs visited us today, Wellington and Max. Wellington is just about the cutest King Charles Spaniel I've ever seen, and Max is one mighty gorgeous boxer. 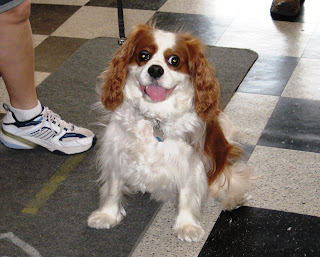 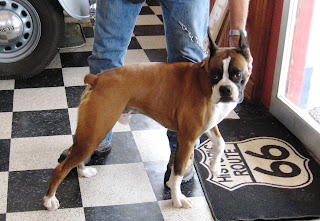 Both of their owners were participating in an Airstream travel trailer caravan that stopped by today -- six Airstreams and 13 people altogether. They were from the Kansas City area and were headed for a weekend on Grand Lake. For a while, the Station looked like it had been attacked by huge steel bullets!

Here's Boris, a man after my own heart. Can you read his t-shirt? Yesterday, he actually attempted to eat the 72-oz. sirloin at the Big Texan Steak Ranch in Amarillo. He wasn't able to finish, but I think I respect him more for his inability to finish than if he'd wolfed down the whole thing. He managed to eat about half of the steak, along with the required accompaniments of baked potato, roll, shrimp cocktail and salad. His inability to finish cost him $72, but he said it was worth the fun. His shirt reads "I TRIED TO EAT IT ALL". Nice try, Boris! Incidentally, Boris is from Los Angeles and is traveling the entirety of Route 66 from west to east all by himself. Big Texan Free 72oz steak 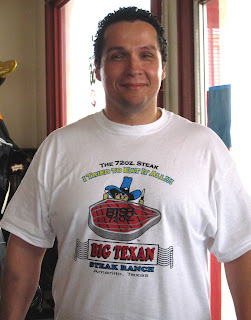 Rounding out the guest list on this rainy day were a couple from Brisbane, Australia traveling the whole Route and then some, and a couple from Troy, OH who were scouting Oklahoma Route 66 while camping at Grand Lake in their 5th wheel.

David, Marly, and Doyle worked most of the day, getting rid of most of the "parts cars" (i.e. rotting hulks) in the back yard in preparation for erecting the BIG new building in the back which will be the second showroom. When I arrived this morning, I found Doyle setting up a lightning rod on "Big Ugly", while lightning was exploding all around him. I told him that was probably a really bad idea. LOL! Marly and David had eight visitors yesterday while they were working, some of them from Spain.

End of month bookwork yielded these figures: 558 guests in September, give or take a few I didn't record. Open for at least part of every day of the month except Sept. 2. (That really IS a new record!). Visitors spent an average of $1.70/person (not so great -- I guess the economy is hitting Route 66 travelers just like everyone else.)

It makes my stomach hurt just to think about eating a 72-ounce steak! [gurgle]

Good month, except for money spent. Maybe things will pick up closer to Christmas?

I don't think things will pick up closer to Christmas as you never know what the weather is going to do! OK and TX can be very volitable in the winter months, I am thinking!
Beth, have you ever seen the size of that steak? It is displayed in the front of the rest. It looks like a freakin Pot Roast!!!
With all the stuff. I could eat for a week!!!!!!!!!

I had a lot of fun at the Big Texan Steak Ranch:
http://eatingtheroad.wordpress.com/2009/11/17/big-texan-steak-ranch/