When The Lights Go Out

The lights went out in Afton today.  We had some bad weather last night that may or may not have messed up the power pole behind Bassett's building.  At least that's where the electric company trucks went.  The lights were only out for a little over an hour, but during that time, so many things went through my mind.

1 ) What about the tourists who can't go into the windowless second showroom?
2)  What if the lights come back on after I leave and I've forgotten to turn all the switches to 'off' before I go home?
3)  What about the fridge that I should have defrosted ages ago and now has enough ice built up in it that it will flood the place if it melts?
4)  What if someone is trying to call on the land line that works on a charger, thus is useless?
5)  Will this knock out the security system?

I barely had time to process all those worries when the lights came on again!  Yippee!

Marly and Phil were around in the morning but soon left to do their own thing.  I'm still here, and my guests so far have been a Studebaker-loving trucker from El Dorado, IL and a couple from Neosho, MO doing Oklahoma Route 66 on a two-day trip.
____________________

My magical mystery Nikon is behaving badly again.  Thus, apologies to the folks from Carthage, MO and those from Clayton, IN who came in during the afternoon and of whom I snapped photos.  I'm being careful now and checking the card immediately after taking a photo to make sure it's there.  These two were absolutely there, and yet when got home, they weren't!  It's a new SD card, too.  I'm so frustrated.

Just as I was leaving (and Phil was hanging in there for another hour), some lovely folks from Kennebunk, ME.  We get very few visitors from Maine.  As the visitor reminded me, there aren't that many people IN Maine!

Two photos I took today did come out.  Here are the new t-shirts we're selling at the Station.  The white one is long sleeved and the black one is short sleeved.   They're well made and very cool, in my humble opinion.  Click to enlarge pics to see details.  Come and get 'em! 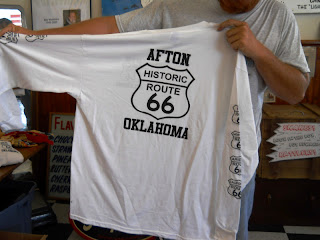 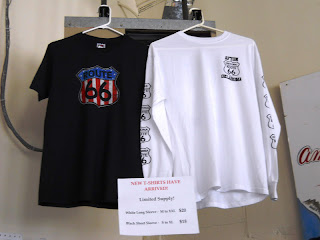 I am sorry to hear about the SD card—unless you are hitting the "format" button (usually pretty darned hard to do unintentionally), it may simply be a lemon. You might want to return it to the purchasing site for a new one!

We got one of each! haha