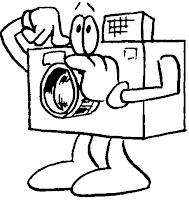 Gordo, I was only joking when I said that taking a picture of you might break my camera.  I didn't mean it. Really!  Nevertheless, apparently my camera is broken.  Either that or something very mysterious is occurring with the SD card.  I took three photos at Afton Station yesterday and, as I always do, I took a quick look at them immediately after taking them, just to make sure they were ok.  They were.  Then, this morning when I went to transfer them to my computer, they were gone!  Yes, GONE!  I am mystified.  I just took a couple more pictures to test things.  Everything seems fine.  So, no photos from the Station for yesterday.  And big apologies to the lovely couple from Australia, and the two enthusiastic and attractive ladies from Denton, TX, all of whom I had hoped to picture on this blog.  Just let me say that I'm sick of breaking everything I touch.

Meanwhile, yesterday at Afton Station was quite nice.  The aforementioned Gordo came back for a second visit in three days.  He met up at the Station with another Valkyrie-riding guy (from N. Vernon, IN) and they were off on  their bikes to parts West.   The two had never met before, other than chatting on a Valkyrie website.   I think they're going to  have fun, though.

Other visitors were from Brookville IN, Dallas IL, Paris AR, and Salt Lake City UT.  There were 13 altogether, and it was a very nice, calm day.  At 3 p.m., I left Phil to mind the store while I fetched Ron M. from the airport as he returned from his almost-four-week world tour. (GREAT to have him home again!)  Phil called at 6 p.m. from the Station.  He was still there and still greeting visitors!   Oh my!
Posted by Laurel at 4:48 AM