I Am SO Spoiled!

When I arrived at Afton Station this morning, both Phil and Marly were there and had opened up for me.  But shortly thereafter, both had to leave for different reasons, and I was all alone.  That's nothing unusual, except that it's been weeks since I've been alone in my own place.  It sounded like a chance for a nice restful day. . .  until people started to arrive in droves!   What a day!

Phil came back after a few hours, but by that time I'd greeted 25 travelers, and when I left this evening I'd greeted 37.  Phil decided to stay an hour or two later to see if we could get the number up to 45.  It was a spectacular day.

My first visitors were folks from San Antonio, TX in two beautiful vintage Corvettes followed by a friend driving a "sag wagon."   Take a look at these beauties.  The first is a '60 and the next is a '65.  It's amazing how the style has changed in just 5 years. 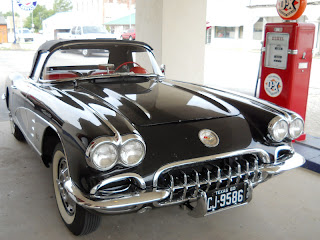 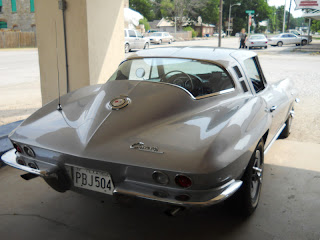 Shortly thereafter, a couple from Great Britain came in, and as is my usual routine, I asked them in what part of the country they resided.  They answered that they lived in a small village in the country, in the region of Birmingham.   While they were in the showroom looking at cars, another couple from England came in.  I asked them the same question and they answered "a small village in the country near Birmingham"!  I love coincidences like that.   It turns out that their home towns are just a few miles from one another.  They didn't know each other, but they do now!

Here's one of those couples flanking the other.  Lovely people, all of whom are traveling Route 66 from east to west.  I wonder if they'll find each other again later as they move across the country. 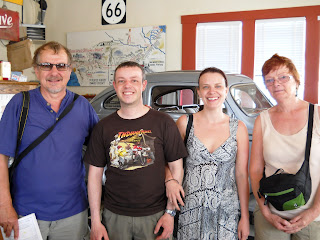 I got to meet Richard and Gail Talley of the iconic Route 66 Motel Safari in Tucumcari, NM.  They surprised me with a visit late in the afternoon on their quick Route 66 trip, a getaway before the really busy season begins at their historic motel.  (Check out all the great recommendations at http://www.yelp.com/biz/motel-safari-tucumcari.)  I was so glad to meet them.  Judging from their warm personalities, they are clearly cut out to be in the hospitality industry.  I wish them a great trip and a very successful season at their place. [Richard's sling has something to do with a horse and a fence. . .] 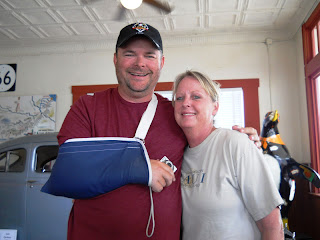 And now, for the rest of the story. . .  Further visits were from travelers from Talala OK, Lawrence KS, Sadler TX, Lee's Summit MO, Edgerton KS, Centerton KS, Paola KS, Okawvivlle IL, and Kansas OK.  There were about as many bikers as car drivers, and nearly every visitor was in the midst of a full (and jealous-making) trip across Route 66.  I managed to refrain from stowing away in their cars or jumping on their bikes and forcing them to take me along.  It wasn't easy.

So many visitors--your reward for restoring the Station and offering a great place for travelers to stop. Eager to hear if the number made it to 45 before the day was over. Surely these numbers are an indication of an increase in travelers on Route 66.