What a lovely international day, with visitors from several countries.  A couple of  friends dropped by, too.  Among our 18 visitors today were. . . .

. . . yet another joyful, smiling, interesting couple from the Brisbane area in Australia.. . . . 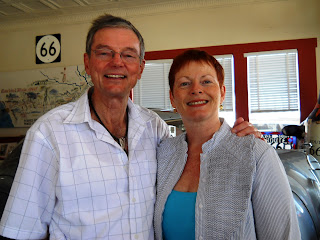 . . . this delightful father and son from Germany.   The son spoke perfect English (and, by the way, was ridiculously handsome!), and the father is just now learning English but doing a great job of it.  He did say he was having a bit of trouble understanding "Okie", but then who doesn't?  They came on motorcycles. 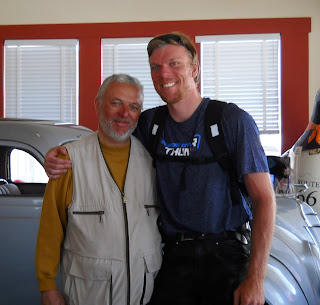 . . .  this couple from Wales, although I mistook him for an Aussie because of that hat, and because he greeted us with "G'day".  They were fun! 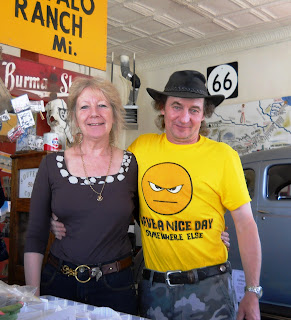 . . . these two from near Medford, Oregon who clearly were enjoying their trip. . . 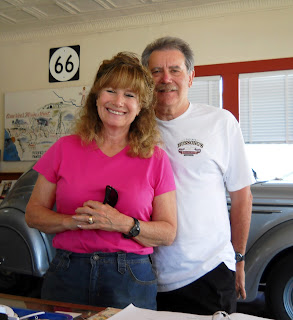 Frequent visitor Jon Edwards from Tahlequah, OK dropped by, on his motorcycle as usual.  He just rescued a '50s era Packard from the crusher and he brought a photo of it.   It's unbelievable that someone would crush such a lovely car in such great condition!  It runs and he'll be restoring it soon.

Friend Brenda from Akron, OH also stopped by on her way home from a trip in which she visited with several folks along the Mother Road.  This very afternoon, she had lunch with Tattoo Man at the famous Hank's Hamburgers on Route 66 in Tulsa. 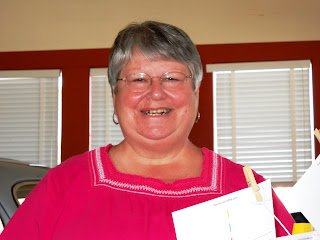 And speaking of food and Tulsa, there's a new,  unique eatery on Route 66 (11th St.) in Tulsa, so I stopped to take a photo this morning.   Lola's, formerly in another area of Tulsa,  has moved into an Airstream trailer and will be serving all kinds of interesting fare.   It was closed when I was there today, but later in the day she sets up tables, chairs, and colorful umbrellas in front.   I can't wait to try it, as I liked Lola's offerings at her old place.

I think that's all for now, except to thank Phil for helping with the meeting and greeting again today.

Great day and what fun.

Hey Laurel, we had a great time in Afton and thanks a lot for this inside hint with the Kountry Kitchen. We had a delightful lunch and the not so handsome German could smile at a very cute blond lady from town. Thanks for a great time and precious memories. Oliver

Someone was actually gonna crush a PACKARD!?!? They should be sentanced to drive a Yugo for 10 years!!