Just Me, the Flies, and My Air Conditioner

It's been a while since I've spent almost a whole day alone at Afton Station.  I had enough to do and plenty of visitors to keep me busy, and yet I missed having folks to hang out with between travelers' visits.  This was also the first day of the season that required me to turn on the air conditioner, so its constant, loud hum made me a little crazy all day.  It was better than the humid low 90s temp outside, though!

Fly season has begun, the time when I realize that my $1 fly swatter is perhaps my best bargain purchase ever.  I'm sorry to say that I murdered quite a few flies today.  Every time I end the life of one of the little pests, I think of dear Bob Waldmire, who wouldn't hurt a fly -- literally.  He must have been stronger than I am, to be able to coexist with those buzzing menaces.

My visitors came in pairs today.  This couple from Boswell, OK was surely fun to talk to!   She has done a good bit of advance planning for their Route 66 trip, which they're taking in small segments so they can stop at each and every attraction along the way.   I've mentioned before how much I appreciate those people who appreciate guidebooks! 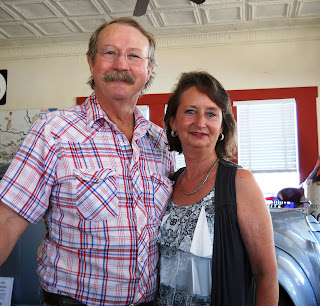 The afternoon brought an influx of Chicagoans!   These two guys, as well as the couple in the following photo, arrived at the same time and all were from the Windy City.  John and Rick came on motorcycles, having been down south and doing a little Route 66ing on their way home. 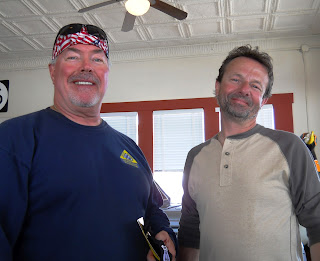 Linda and Jim are also from Chicago and it's possible that their son and daughter-in-law know my daughter Sarah.  Small world.  They have quite a car collection of their own. 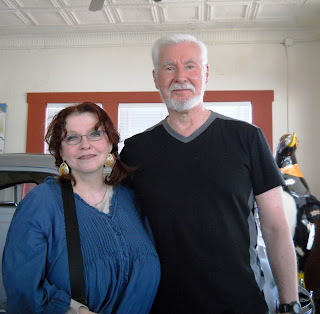 My other visitors, who unfortunately weren't photographed, were from Mendota IL, Stillwater OK, Raleigh NC, and Colllinsville OK.

The Kountry Kafe is the name of the little joint just down the street from Afton Station. I'd never gone there because I'd heard about its reputation as a honky tonk bar -- not necessarily my mid-day kind of place.  It had been closed for several years but recently reopened.  Robin and Phil gave it a try for lunch the other day and, lo and behold, found it to be pretty good.  They said the hamburgers were actually great!   And, it's perfectly family-friendly during the daytime hours and doesn't revert to a tavern until later in the evening. So, it's nice to know that there's an acceptable spot to dine in beautiful downtown Afton. 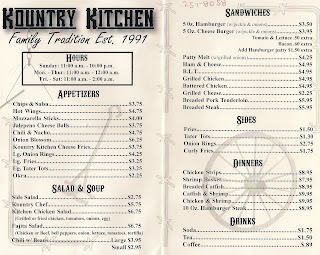 Remember "my" corn field from the summer before last?   (It's not really mine, but I like to watch it grow and thrive and stop occasionally to record it's growth.) Well, it's been planted again this year, and as usual, I'm watching it carefully, especially now that I know that my friend Reuben Tipton owns it.   Reuben grows the best corn on the planet!   Here's a photo of it, as of today.  Some of the perimeter got washed away a bit in the recent deluge, but most of it is looking wonderful. 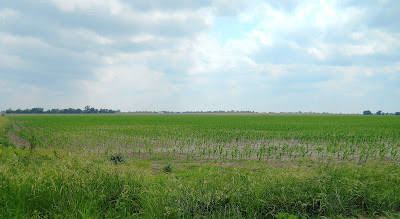 HEY! Mendota... that's almost in my neck of the woods!!

Mr. Bruce got a short DVD called "Flying Route 66". Great photos. I thought of you, wished he had cover more of OK. As I said, very short and mostly about flying.

I think Noah could have saved us all a lot of trouble if he only swatted the two flies, mosquitos, and spiders he had on the Ark.

Tim - Thanks to your comment, I realized I spelled Mendota wrong, so now it's fixed.

Miss Dazey - I'll try to find the video online because I'd like to see it.

I so love hamburgers, Laurel, especially if it's cheesy and leafy! Well, air conditioners are extremely useful in summers. That’s why electricity bills soar. I know, I know. :) I have my experiences. :P Well, do you have ceiling fans? Trees and large shrubs outside the house? These are very helpful in saving energy. Having trees and large shrubs outside can reduce the air temperatures by up to 20 degree, while ceiling fans help air circulation when the windows are open.

So, why is your AC humming so loud? Maybe it needs repair. You should have it checked now or else it might shut down. This is not the right time to encounter such inconvenience. But anyway, I got swayed by your corns. I hope they all turn out to be sweet and delicious!

Laurel, if the sound of your air conditioner is coming from the registers or vents in your home, then there's absolutely no problem with the mechanics of the system. Why? Because the rush of air that is forced through by the fan always makes a roaring sound, amplified only by the ducts.