Our day at Afton Station began on such a happy note.  A very cute young couple from Lancashire, England, who signed the guest book simply "Mr. and Mrs. Daniels", stopped by as they drove across Route 66, having been married in New York City over the weekend.  We love visits from newlyweds, and these folks were so obviously happy that they cheered up the whole atmosphere at the Station.  They told us about a group called Virgin Holidays, which plans every aspect of U.S. weddings for those living in other countries.  The "package deal" included a choice of venues (they chose Central Park), and all other expenses, and they even arrange for someone to do the marrying.  Therefore, they paid less for this wedding (and subsequent 3-week honeymoon) than they would have paid for a large wedding back home in the U.K.   Awesome! 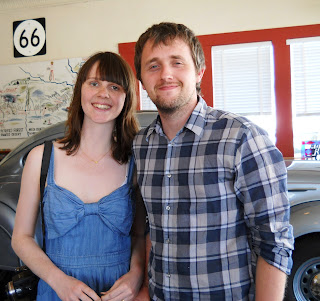 Toward the end of the day, a group of 8 friends from the Czech Republic pulled up in two cars.  They, too, are traveling across Route 66, all the way.   Here are seven of them.  The eighth was asleep in the car until after the photo was taken.  They  very much enjoyed the pressed penny machine. 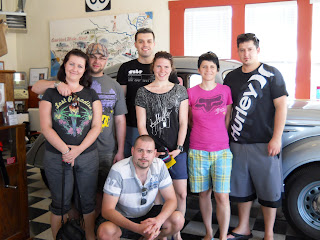 This couple from Toronto, Canada were also quite fond of the pressed penny machine.  The pressed pennies are a rather perfect souvenir, particularly because they're small, portable, and inexpensive.  And we have four different designs -- something for everyone. 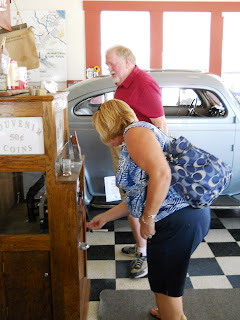 Ron M. and Phil were with me today, and Marly came by at the perfect time for us -- although perhaps not so perfect for Marly, since we had to leave, so we left him there to close up the Station!   The remainder of our 17 visitors came from Seattle WA, Overland Park MO, Miami OK, Spavinaw OK, and Minneapolis, MN.
Posted by Laurel at 5:56 PM