All hands were on deck at Afton Station today in preparation for a visit from Dale Butel's very large tour group from Australia.   There were 63 folks on the tour this  year.  This group keeps growing and growing, which I believe is a testimonial to Dale's well-organized tours.   In fact, he told me several months ago that the group would arrive at 12 noon.   When did they arrive?   Exactly 12 noon on the dot!  Amazing!

Actually, the first group came at noon.  Those were the people in cars.   About an hour later, the motorcycle riders arrive.  Dale finds it practical to divide the group now that it's so large.  It makes it easier on the restaurants and other attractions (like Afton Station) which become overwhelmed by the sudden influx of visitors.

As always, the Aussies were wonderful.   They are truly fun folks, and they seem to enjoy their visits to the Station very much.  They bought lots of books and small souvenirs, so that makes them even more appealing.  It was a great way to break through the low sales numbers we've had during the winter.  Although we're not here primarily to make money, a little income sure helps run this place!

David came in earlier in the morning to take out one of the Packards in which he was to be interviewed by Rick and Richard (Cimarron Productions) on their 2nd visit to Afton this week.  Once again, they stayed all day and even helped with crowd control when the Aussies descended upon us.

This Australian lady tried to steal the Packard, so we had to take the keys away from her.   :-) 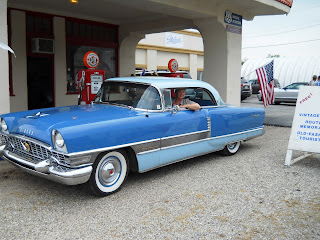 As usual, there was a lot of milling around outside of the Station, checking out the car and the town.   I like the little girl hiding behind the pillar! 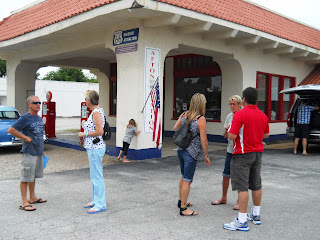 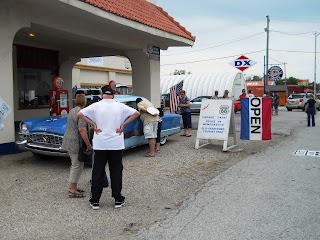 When the motorcycle half of the group arrived, they took over the milling around duties. 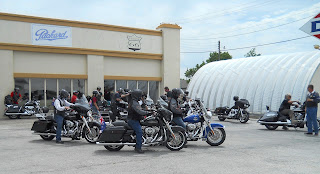 I loved this woman's hat.  When I took this photo, she was buying one of the Anderson Productions pins to add to her collection. 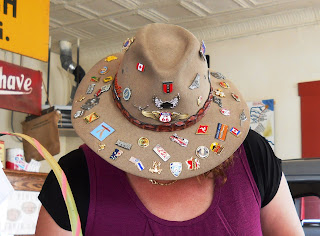 When the motorcycle group was still visiting, two van loads  French travelers pulled up across the street.  The eight folks from the Bordeaux region of France mingled with the Aussies so it was difficult to know who was from which country until one tried to talk to them.  Other visitors for the day were from Hawthorne FL, Bernice and Grove OK, and Biarritz, France.    Thanks so much to Phil and Marly for helping out all day.  I couldn't have done without them today!

This week at Afton Station just keeps getting better! What fun this must be for you.

Kind of exhausting, but I love every minute. Saturday it will be a group of Mazda Miatas. Never a dull moment1

Right now I wish I would have spent the day with you. Sounded like a great day. Maybe next time.