I'm talking about two signs in particular, and I've been awaiting both for a while.    First, the beautiful small billboard advertising "Afton Station -- 9 Miles" has finally been put up on the fence in front of Marly's mother's house.  The making of the sign was a group effort by Marly, Robin, and me (although all I did was cut the stencils for the lettering).   Marly's mom happens to live exactly at the intersection where the Miami segment of the old Sidewalk Highway alignment meets with the newer stretch which leads into Afton.  A perfect spot to assure that travelers turn in the correct direction to get to  Afton Station!   (Click pic to enlarge.) 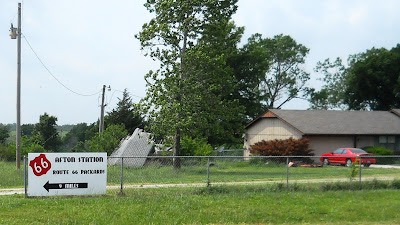 The second exciting sign in my life is also one which I've been awaiting for some time.  Several months ago I bought one of the iconic old neon blue swallows from the Blue Swallow Motel in Tucumcari, NM.   Neither the Mullers (new owners of the motel) nor I wanted the fragile bird to be mailed, so I had to wait for someone to be passing through Tucumcari who would agree to bring it to me.  That job went to Tattoo Man, who picked it up on his way home from a California trip.   It doesn't look like much in the picture, but when it's lit up in bright blue and hung on the wall, it will be an amazing addition to the Station. 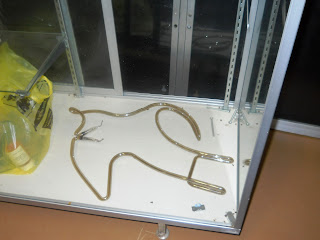 One more thing before I tell you about my day. . .  The very creative Robin is at it again.  This time, she decided to decorate a cow skull in a Route 66 theme!   It isn't finished, and this is a terrible photo, but she is decorating the skull with sequins, beads, and other shiny tiny objects.  When finished, it will be almost totally covered.   Very interesting.   I just might buy it from her.  I've seriously always wanted a cow skull for the weird Route 66 room in my house. 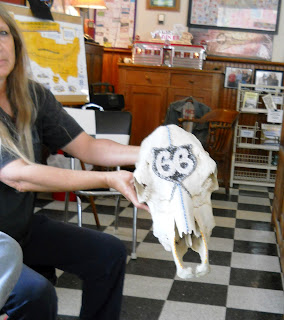 It was an unusual day at Afton Station.   Most of our visitors came in the morning and the afternoon was fairly quiet.   At various times, Robin, Phil, Tattoo Man, and Marly came to help out.  Our biggest onslaught was an early morning visit from Great Plains Modern Mopars.  They and their colorful cars visit annually, but the group was somewhat smaller (7 cars, 14 people) this year because of the slightly threatening weather.  Although the bad weather never materialized, talk of high winds and large hail caused a few dropouts.  Nevertheless, they're a happy group and we enjoyed their brief visit. 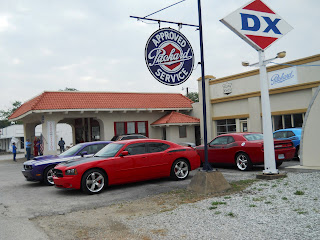 Other visitors came from Luzanne Switzerland, Queensland Australia, and Jay and Tulsa, OK.   Here's the Aussie (center) with his American friends from Tulsa. They arrived on motorcycles but had to hurry because his bike had to be returned to the rental agency just a few hours after their Afton Station visit. The Aussie described himself as a "panel beater", a term I'd never heard before.  I found out that it's the Australian nickname for auto body mechanics! 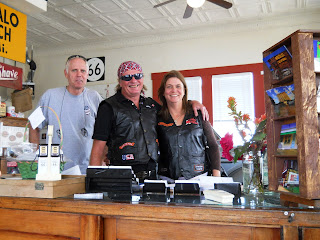 Finally, here's a sweet little doggie named Teddi who was brought to visit by one of two couples from Tulsa.  What a cutie! 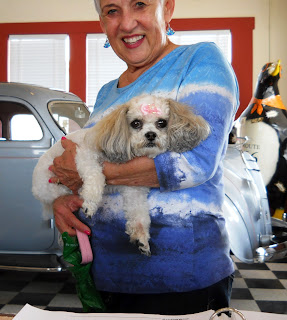 Your little swallow will light?! What a fabulous addition to your collection.

If you're tallying visitors by country surely the Australians must be in the lead.

Yes, when wired up it will glow a cool blue!
And yes again -- Aussies are way ahead of other foreign visitors at this time.

The blue bird, what a wonderful addition to the collection